HUNTSVILLE, Ala. – The U.S. Space and Rocket Center attempted to set a Guinness World Record by launching 5,000 rockets at 8:32 a.m.

Volunteer Jeff Sauder was 6 when his father saved a Philadelphia newspaper four days after the Apollo 11 mission launch — an earth-shattering achievement.

“I actually remember laying on the backseat of our boat, looking up at the moon one early evening thinking ‘There’s a man up there?'” Sauder said.

Sauder and other volunteers from Intuitive Research and Technology and the U.S. Space and Rocket Center placed the rockets on frames Tuesday morning to try and set the record.

“This is such an exciting day for Huntsville,” said Intuitive co-founder Harold Brewer. “This is a defining moment in Huntsville history.”

The 50 frames of 100 rockets each were meant to symbolize the five F-1 engines on the Saturn V rocket.

The public and kids attending Space Camp also were on hand to watch the attempt. 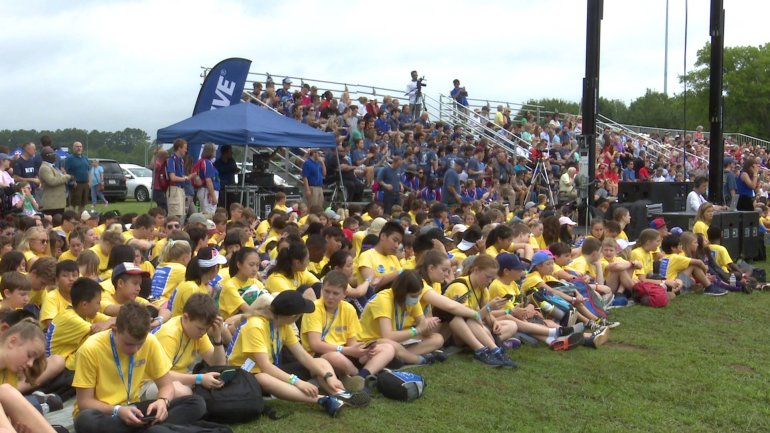 “What I’m hoping is someone out here in these grandstands today is going to be the first person on Mars,” Brewer said.

He may be right.

“It’s always been my dream,” said Space Camper Sierra Isbill. “I’ve always known what I was going to be, and I’ve always loved space. It’s kind of my passion.”

There’s been concern around rescheduling and the cost of NASA’s Space Launch System rocket. Marshall Space Flight Center Director Jody Singer said four of the the five components making up the rocket’s core stage have been assembled.

“I have all the confidence of us being able to support 2024 boots on the moon,” she said.

Unofficially, the Space and Rocket center says 4,923 rockets were successfully launched with 77 left behind — which would still give them the record.

They plan to submit their evidence to Guinness by the end of the month and we’re told they’ll hear back in 12 to 16 weeks.

NEW YORK (AP) — It will be another year before a new “Mission: Impossible” movie hits theaters.

LOUISVILLE, Colo. (KDVR) — Only months before their long-anticipated wedding, Michael Parks and Kim Reiss were certain their rings were gone.

The couple lives with Parks's mother and had just seconds to grab their dog and get out as flames from the devastating Marshall Fire closed in.

PHILADELPHIA (WJW) -- Twin girls who were born conjoined are finally home after nearly one year in intensive care and a 10-hour separation surgery.

According to a press release from Children's Hospital of Philadelphia (CHOP), Addison and Lilianna Altobelli, now 14 months old, were born connected at the abdomen and chest and shared a liver, diaphragm, chest and abdominal wall.