HUNTSVILLE, Ala. – If you’re a Star Wars fan you already know what day it is, but for those don’t, it’s May the Fourth, also known as the unofficial Star Wars Day.

To mark the occasion, Star Wars fans are flocking to Toy Box Bistro in Huntsville. “I mean ever since I was a kid I’ve been in love with space travel and Star Wars,” fan Thomas Hawkins said.

It’s the restaurants busiest day of the year.

“It is all hands on deck because today will be almost double what we normally do,” Toy Box Bistro owner Michelle Timon said.

As people walk through the doors they take off at light speed to a galaxy far, far away. “It is so cool. Like I really like the decorations,” Natalie Balch said.

The restaurant is known for its eclectic decor, but on the fourth of May, it’s decked out in Star Wars memorabilia inside and out. 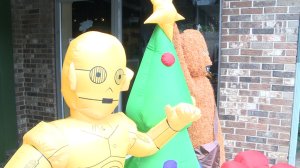 Some might not understand how this Christmas tree inflatable goes with the day’s theme.

Timon says for fans, it’s the most wonderful time of the year. “Huntsville is a very nerdy town and today is May the Fourth which is the unofficial Star Wars Day or what we like to call nerd Christmas.”

The restaurant also rolled out a Star Wars-themed menu so people can taste the sweet nostalgia. “I got the Yoda taco,” Balch said.

It includes several dishes including the Death Star Burger, and the Rancor’s Po Boy.”One of my favorite scenes in Star Wars when Luke Skywalker was in the pit fighting him,” Hawkins said.

And even dessert. “The Obi-Wan Cannoli, our dessert name is pretty funny,” Timon said.

Why is the day such a success for the restaurant? Timon says people can’t resist the force of May the Fourth.

HUNTSVILLE, Ala. - The mother of Bradley Pugh, who was shot and killed during a standoff with Huntsville Police in November of last year, held a vigil for her son Sunday evening.

Adina Peyton, told a small crowd of people in Huntsville's Big Springs Park that the vigil was not only about honoring her son's memory but also dismantling the stigma tied to mental illness. Peyton added that part of that effort required engaging the community on the issue of mental health calls to police.

Pugh was shot 16 times after Huntsville police say he pointed a gun at officers during a standoff at Teds BBQ in Five Points. Over the last six months, Peyton has gone back and forth with Huntsville Police about that night over access to body camera footage.

Last week the city released a statement saying they allowed Peyton and her attorney to view relevant video of the incident. Peyton said she wants access to all of it, not just what the city deems relevant for her to watch.

At Sunday's vigil, Peyton spoke out against law enforcement officers being dispatched to mental health calls. The city recently announced it was moving forward with a program to make mental health professionals the sole responders for mental crisis calls.

Peyton also addressed the issue of overall declining mental health right now, amid the COVID-19 pandemic. She also spoke directly to those struggling with suicidal thoughts.

"Look at me. Listen to me. I've been where you are. I have been where you are and see what you don't see because you're in the dark, and the light is just on the other side. We can get you to that light. You can trust me. See what's happening here is all you have to do is connect heart to heart. People want to believe," said Peyton.

In the next few weeks, Peyton said she planned to begin addressing these issues on a regular basis during community forums. A date for the first forum has yet to be set.

If you or someone you know needs help, the National Suicide Prevention Lifeline can be reached at 1-800-272-9255.

ALABAMA - Governor Kay Ivey has awarded more than $22 million dollars to help Alabamians who are suffering from homelessness or at risk of becoming homeless because of the pandemic.

Erwin says the funding received is very important to the city of Huntsville and is a step towards giving the community the help it needs.

HUNTSVILLE, Ala. -  The 2021 U.S. Paralympics Cycling Open presented by Toyota is a two-day event. The events are scheduled to take place April 17-18, 2021. With Saturday races starting at 8:30 am and Sunday starting at 9 am.

There are a few things you need to know. Athletes will start to arrive on Tuesday, on Wednesday athletes and volunteers will take COVID-19 tests and then they will begin practicing for the weekend's events.