HUNTSVILLE, Ala. – Some of Huntsville’s most notorious murder cases have a link to the occult.

That may sound like another ghost story around Halloween, but it’s also a view held by the Madison County DA, a 40-year criminal defense lawyer, the Speaker of the Alabama House, and an investigator who spent decades on the subject.

In the spring, WHNT News 19 reported on the dark writings of Jeffrey Franklin, the Huntsville teen who killed his parents and tried to kill three siblings in 1998. Franklin pleaded guilty to the killings and was given a life sentence. He was up for parole this summer, but it was denied.

Discussion of the Franklin case led WHNT News 19 to Bennett.

“His dad actually called me six months before the crime, and asked if he thought having the Satanic bible was a big problem. I told him that it was,” Bennett said. “And ….  course approximately six months later Jeff committed the acts of murder.”

Bennett also trained officers on what to look for if they suspected possible occult links to crime.

“If I went on to a scene, or I was looking for potential cult involvement I would look for books, writings, drawings, the environment of the house or the dwelling,” Bennett said. “If you have one indicator it doesn’t mean the person is involved in the occult, or in occult crime, it takes a cluster of indicators to determine if a person is involved in some type of occult crime.”

“In Jeff’s case, he actually was, intended to sacrifice, at least two of his family members,” Bennett said. “He wrote . . . ‘Hail Satan, shall offer up my mother and sister, to thee lord Satan.’”

“Jeff didn’t write that after the murders, Jeff wrote that some time prior to the murders. So, Jeff had an intention, according to this document, to offer his mother and his sister to Satan.” 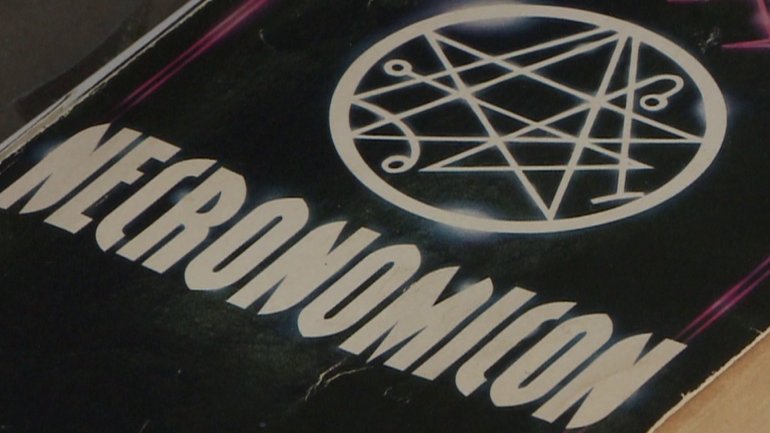 Bennett said the Satanic Bible and the “Necronomicon” were found among Franklin’s writings and drawings after the murders.

“All the documents pointed toward Satanism, but it had very much a tint of what’s contained in the book, the Necronomicon,” Bennett said. “And this book is one that a Wiccan informant of mine would not let me bring in to her house, she said it was too evil.”

“The book has incantations and material in it that would allow an individual of like mind to go off into some type of spirit world.”

The Necronomicon, credited to American horror writer H.P. Lovecraft and writers who followed him, has been derided by some as a work of fiction and a hoax, not a spell book. Lovecraft referred to it in various stories and claimed it was actually created centuries before by a character he refers to in his stories as Abdul Alhazred.

Madison County District Attorney Rob Broussard said Bennett’s work on the occult was informative and helped in a number of cases. He said there are often cases where a defendant suggests they were under demonic influence, as part of a possible defense of not guilty by reason of insanity.

“So I’m skeptical when I hear that version, sometime later, but there’s plenty of cases we’ve dealt with around here that were contemporaneous or even before the fact, where somebody is actively involved in the occult,” Broussard said. “And I’d be crazy not to think that’s actually a driving force, a motivational factor why they did what they did.”

Eileen Janezic was convicted of killing a Huntsville reverend inside his church in 1993. She was arrested a week after the killing and police said she was holding a Satanic bible at the time of the arrest.

Her lawyers argued she was suffering from serious mental health issues.

Her attorney Mark McDaniel said it was an unusual case to handle.

“She had a Satanic songbook, and a Satanic bible and it was very vulgar, but she would sit there and try to talk to the devil, talk to Lucifer during the trial,” McDaniel said.

After 40 years of practicing criminal law, McDaniel believes there is more to the world than meets the eye.

“And it is real and it is out there,” he said. “And anybody that doesn’t believe it … it is there.”

Mac McCutcheon is now speaker of the Alabama House. He was the lead investigator in the Franklin murder case back in 1998. The occult influence was obvious to McCutcheon.

“And because of his writings and his belief in the occult, and Satanic type beliefs, I mean it just stood out, there was no doubt about the fact there was a connection,” McCutcheon said.

The Huntsville Police Department doesn’t have investigators who specialize in occult cases. Bennett said he doesn’t believe the problem has gone away, but he understands what departments face in trying to deal with the occult.

“It’s bizarre, it takes manpower and it is very close in some people’s eyes to infringing on the rights of people who want to worship in their own way,” Bennett said.

Bennett said young people can be lured into occult practices as a kind of rebellion or a way to stand out for being odd, but over time the idea of invoking outside forces can become addicting and they don’t know how to get out.

“Being accepted by peers may be the initial draw,” Bennett said. “Power over people, situations, personal needs, is the main attraction according to my experience.”

He also believes that the Franklin case reaches into the present.

“Lone practitioners, are very rare, I really couldn’t name you a person who was a lone practitioner,” Bennett said. “My thought would be is there are people out there who know what Jeff was involved in… and of course they haven’t said anything.”

Note: Updated at 10 a.m. on Nov. 2, to include background on Necronomicon.

These ‘desirable’ US counties are still affordable

NACC Theatre to present ‘The Zoo Story’ this month