The congresswoman represents much of inner-city Houston and is serving her 11th term. She also has served on the Homeland Security committee since the September 11 attacks.

Representative Jackson Lee fielded questions from students and used the platform to talk about criminal justice reform, preserving historically black colleges and universities (HBCUs), but most importantly, working together. 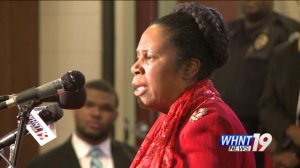 “Don’t seed your ground, but find a common ground,” she said, mentioning the criminal justice and juvenile justice reform she is working on with bipartisan counterparts.

“I’m hoping that all across America, when they see me standing with representatives from Utah, congressman from Virginia and beyond, who happen to be Republicans, they will see us as Americans,” she said.

The congresswoman strives to solve problems and base decisions in fact. That’s a lesson she pushed the students to take with them as vote in this year’s presidential election.

“We have presidential candidates shunning people, that’s not America.”

She said she has worked closely with Hillary Clinton in the past and endorses her for the upcoming election, because, she says, Clinton has done work before her campaign that Jackson Lee acknowledged.

“Hillary joined me to write legislation to place Sojourner Truth in the United States Congress [building],” she said.

Sojourner Truth’s statue is the first of a black woman in the legislative building, and the congresswoman says it was an important message about women’s rights and the end of slavery.

(WHNT) — A new survey found Huntsville to be among the best places to rent in the United States.

According to the WalletHub poll, Huntsville was ranked 15th out of 182 cities. The only other Alabama cities to make the list were Mobile at 85, Montgomery at 138 and Birmingham at 164.

MORGAN COUNTY, Ala. — First responders are on-scene at a possible drowning in Valhermoso Springs.

Authorities say the possible drowning occurred at Talucah Beach with both deputies and rescue squad responding to the situation. Air evacuation was underway at approximately 2:30 p.m.

Wyche, a 31-year NASA veteran, has served as acting director of Johnson Space Center since May 3, but now the appointment is official.

A quarter of a century later, 1996 Olympic softball competition left legacy in Georgia

Denver police giving out gift cards to auto store, instead of tickets, to drivers with broken taillights

Startup brings a convenience store to your front door

Is asking about someone’s COVID vaccine status a HIPAA violation?

Car buying vs. leasing: Which is better?

A future without passwords may be closer than you think

Alabama offering $5 incentive for inmates to get shots