HUNTSVILLE, Ala. -- Huntsville Police are investigating a fatal motorcycle wreck involving a teenager. 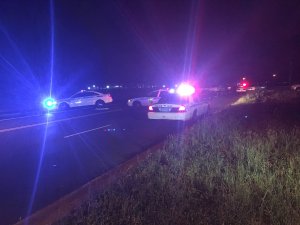 According to police, the 16-year-old was traveling south on Wall Triana on his motorcycle, when he hit an SUV turning into Jack's fast food restaurant.

The teenager died from the impact. The driver of the SUV was not injured.

Jefferson said the world lost a great soul and he's going to miss pointer's smile, kind words, and encouraging attitude. "One of the greatest compliments you can give a kid, is if you had a son you wish he would grow up to be like this kid right here. Tyrone Pointer what a great kid," Jefferson said.

Pointer's presence was a blessing for his coach and colleagues at Bob Jones High School. He's just simply going to be missed. "Just know he`s not gone, he`s still with us, and we love him and love his family," Jefferson said.

Family members say the teen just received the bike last Sunday, and the headlight of the motorcycle was not working.

Wall Triana was closed for three hours while police investigated.

Police say witnesses report the headlight on the motorcycle was not on or not functioning at the time of the accident.  They are still investigating the wreck.  But say no charges are expected to be filed against the driver of the SUV.

HUNTSVILLE, Ala. — A Huntsville man was sentenced to 17 years in federal prison Monday on gun and drug charges.

Steve Lewis Emery, 42, was sentenced to 211 months on two counts of being a felon in possession of a firearm, one count of firearm possession in furtherance of a drug crime, and one county of possession with intent to distribute 50 grams or more of methamphetamine, according to the U.S. Attorney's Office for the Northern District of Alabama.

MADISON COUNTY, Ala. - The Madison County Health Department has flu shot clinics scheduled across the county.

HUNTSVILLE, Ala. — There will be no Christmas floats or marching bands in downtown Huntsville this year.

Because of the pandemic, this year's Christmas celebration in the city will be high in the sky.