HUNTSVILLE, Ala - Has your rent increased this year? If it has, you're not alone. According to a recent study from CoStar, Huntsville's rent prices for multi-family housing are rising at one of the fastest paces in the nation.

The study published says since January of this year, rent in Huntsville has gone up 6.5%. Only three cities in the country have risen at a higher rate, Las Vegas, Reno, and Phoenix.

There is a caveat to this, it only includes cities with 20,000 units or more.

Officials from Huntsville's Board of Realtors are not surprised by the study.

According to CoStar, what makes this feat even more impressive is that for several years the rent rates didn't change much. A graph in the study shows that in 2010, the rates went down nearly 3%. That percentage steadily increased till 2016. 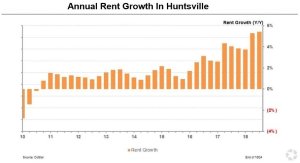 "We cannot keep up with the demand of renters that are moving into the area," Winkles said.

And the area's population is expected to continue to grow.

"Huntsville is supposed to be the largest city in Alabama in the next few years," Winkles pointed out.

There are many new apartments going up, which will continue to drive up the cost of rent.

So Winkle expects rent to rise for the foreseeable future.

While Huntsville's rent prices have risen 6.5%,  the downtown area has seen an even bigger spike.  Since January rent in downtown has risen 10%.

A check of apartment websites show one bedrooms in downtown going for anything from $1,150 to $1,900  a month. Downtown Huntsville, Inc officials say part of the rent increase is due to supply and demand because even though several new apartment buildings have been constructed over the past few years, the area needs more.

"Even with more options, our research shows us that there is a strong unmet demand for residential lofts in the downtown area even with the two new projects coming online," said Chad Emerson, Downtown Huntsville, Inc.'s President and CEO.

According to CoStar, there are a few factors driving up the rent. Office-using employment growth has gone up 20% from the city's pre-recession peak and more households in the 24 to 34 age group are earning $100,000 a year or more. The study says the 24-34 age group is the most important for high-end apartment demand.

Some may not like the sound of having to pay more for multi-family housing in Huntsville, but Emerson says it's a good thing.

"We found when rents are going down whether they're office rents, or residential rents or retail rents when they're going down, that usually means that the city is not strong. So, when they are going up that means there's increased demand which is a good thing for a downtown area like here," he said.

Call it the price of progress.

HUNTSVILLE, Ala. — The Land Trust of North Alabama is offering a free self-guided tour of Monte Sano Nature Preserve.

The new tour is available through the TravelStorys app.

HUNTSVILLE, Ala. - Despite the urging of health experts to avoid large Thanksgiving gatherings, a steady stream of travelers were seen at Huntsville International Airport on Tuesday.

Airports across the country are reporting heavy traffic this holiday season. Nationwide, the TSA reported that over 3 million people went through U.S. airport checkpoints from Friday through Sunday. That marks the largest crowd to fly since mid-March when the COVID-19 crisis began in the U.S.

For those traveling, Huntsville International Airport is providing a number of safety protocols including regular sanitizing of public spaces, social distancing measures, and enforcing mask requirements.

People are traveling despite dire warnings from the CDC about a post-holiday surge in COVID-19 cases, eclipsing the record level of infections already overwhelming emergency rooms. News 19 spoke to several people who felt the Thanksgiving holiday tradition was too important to miss.

"They don't get to see him really often, so we just decided we were going to go ahead and go," said Kennedy Mitchell, who is headed off to Maryland with her son to visit her parents for Thanksgiving.

Another traveler, Victoria Decastro, said she was headed to see family in Florida. "It's always been a tradition for my family to go to a destination and hang out with family," said Decastro. Decastro added that she was bringing plenty of masks and planned to socially distance.

But most health experts seem to agree - they're less concerned about the traveling and more concerned what effect the face-to-face indoor Thanksgiving gatherings will have on the spread of the virus.

Huntsville International Airport won't know how many people traveled through its terminal during the Thanksgiving holiday until next month.

HUNTSVILLE, Ala. - It's officially the season of giving and this year city leaders are asking you to tailor your donations to the homeless.

On Monday, we brought you the latest update from Huntsville leaders pleading with citizens to change the way they give to the homeless community.