HUNTSVILLE, Ala. — That winter cold you have could be more than just a cold, it could be RSV, and while most adults recover from it in a week or two, RSV can cause serious problems for babies.

Kelsey Lightfoot, the NICU manager for Crestwood Medical Center says a lot of people are hearing about RSV. “It’s usually during the winter season, but we have seen it a couple months ago already,” says Lightfoot. RSV, or respiratory syncytial virus, began showing up early this year, much like the flu. Lightfoot added it’s also become more widespread.

Even though it can be compared to the common cold in adults, for others, it can be severe. “The babies, it can be much more serious and cause hospitalization,” says Lightfoot.

The Center for Disease Control and Prevention says RSV is the most common cause of bronchiolitis and pneumonia in children younger than one-year-old. Healthy infants and adults infected with RSV do not usually need to be hospitalized. But some people with RSV infection, especially infants younger than 6 months of age and older adults, may need to be hospitalized if they are having trouble breathing or are dehydrated. In most of these cases, hospitalization only lasts a few days.

Symptoms of RSV infection usually include:

“You might see the baby not eating as well, might see them a little lethargic, difficult to wake up for feedings, and sometimes they won’t be feeding at all or they’ll be throwing up,” says Lightfoot. 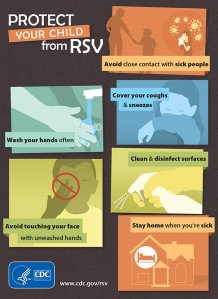 The CDC provides several steps to RSV prevention. Parents of children at high risk for developing severe RSV disease should help their child, when possible, do the following:

“One of the biggest things that is probably most common that people have heard is to not let other people kiss your baby,” says Lightfoot.

Even with taking all precautions, your baby could still be susceptible.

In fact, the CDC says almost all children will be infected with RSV by their second birthday.

If you have any suspicion that your child may be infected, immediately call your pediatrician.