CHATTOOGA COUNTY, Ga. – We’re about to hit the heavy holiday travel season. If you program your GPS for the quickest route from Huntsville to Atlanta, you may wind up on a highway both crowded and increasingly dangerous.

Georgia State Route 48 stretches just 12 miles from the Alabama state line through Summerville. WHNT News 19 headed to Georgia to find out if taking the shortcut is worth it. 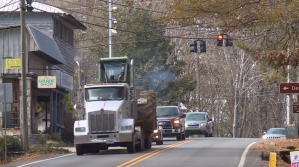 Cars zoom by on a winding country road. Alabama’s Highway 117 takes drivers through rustic downtown Mentone before it connects to Georgia State 48.

“Its the same traffic coming through here through there,” said Chief Gene McKee.

Mentone Police Chief Gene McKee has lived in the town for 2 decades and says there’s more traffic every year.

On top of that, he says 300 semis drive through downtown daily. 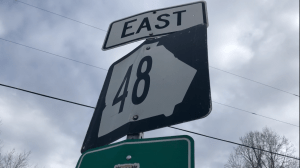 The noise from semis interrupted her interview with WHNT News 19 multiple times.

“And you can’t even have a civil conversation sometimes,” Joy laughed, exasperated.

It’s not just truckers on this road, many say it seems that more tourists are taking this route than ever before and they think it has something to do with GPS. If you use a GPS app on your phone to map the course to Atlanta from Huntsville, there are a few different ways to get there. The route that goes through GA 48 is a few minutes shorter than the rest.

It is a beautiful, long and winding road, but it may be more of a siren’s song than a shortcut. 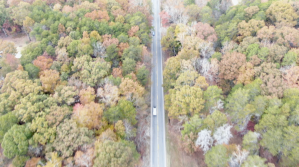 “The problem is, is you have a mountain and it has, it’s very curvy and then you have a couple of pretty large hills on there,” said Chattooga County Sheriff Mark Schrader.

The Sheriff knows of a couple trouble spots.

“The area just as you go out of Menlo before you start going up the mountain that has a couple of blind roads that intersect with the highway and I’ve actually talked with the Department of Transportation about putting some flashing lights up in that area because of concerns of the residents there,” he said.

And the obstacles for drivers don’t end there.

If a car breaks down or is in a fender bender, there is no shoulder to pull over, the internet is spotty and only has emergency cell phone service.

This year, a Huntsville man was killed when a tree fell on his car. There was another crash involving a Madison family, three members of the Park family were killed. A case is pending against a teenager who was was charged in the wreck.

“The accident was a terrible tragedy with the family from Alabama that was killed over there. It was probably one of the worst accidents I’ve been a part of, and I mean it was just very tragic,” he said.

No road is perfectly safe. When it comes to driving to Atlanta people have choices. Law enforcement officials have a message for people taking Georgia 48.

An ominous warning for those who forget it’s the journey, not the destination, that’s important.

On top of the factors that we mentioned, the area of Georgia 48 near Lookout Mountain can get exceptionally foggy. People who live in the area say it makes visibility extremely poor as drivers make their way down the mountain. Wednesday morning, November 27th, the road could be wet and visibility could be reduced in that area.

The first shooting happened at Lufkin Drive and Euclid Road, where police said two people were taken to Huntsville Hospital with gunshot wounds. Police on the scene said the shooting appeared to be accidental.

HUNTSVILLE, Ala. - Whitesburg Elementary students who receive special education services will get a nice surprise when they return to school.

The event will take place Wednesday, August 12 from 2:00 p.m. to 5:00 p.m. at Calhoun CommunityCollege located on 102 Wynn Dr. in Huntsville. Participants are asked to bring their ID andinsurance card if they have one.