HUNTSVILLE, Ala. – It has been over a week since a 3.4 mile stretch of Cecil Ashburn Drive in Huntsville closed to traffic for a construction project. The portion closed connects Big Cove and Jones Valley. 17,000 drivers travel that section of road every day and officials from the city spent several months preparing for increased traffic along alternate routes.

Almost one week ago, roadblocks were placed and construction began on Cecil Ashburn. People have been asked to use these three alternate routes. 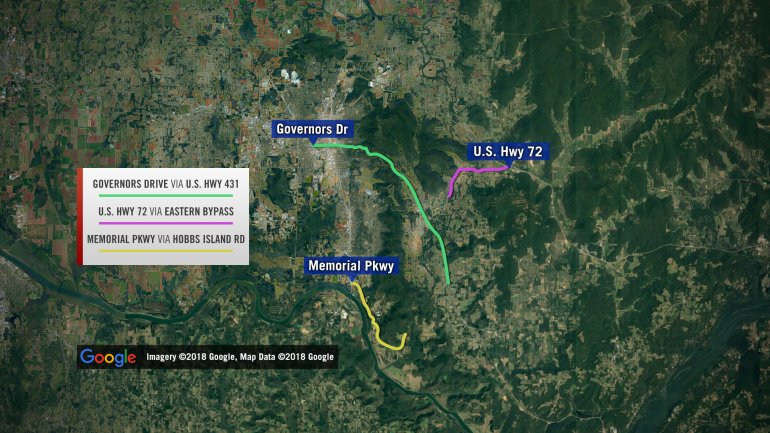 Huntsville Police have increased their presence in those areas as well. Officials from the department say even though there are more drivers on these roads, they haven’t seen a big rise in crashes.

“We haven’t seen a spike in the number of injury-type accidents compared to before the closure,” Lt. Michael Johnson said.

Most drivers are taking Governors Drive, where the city adjusted the traffic signals to have longer green lights. Johnson believes that is helping traffic flow smoothly.

“There definitely are some delays because of the volume of traffic but we have noticed traffic is flowing,” Johnson explained.

Governors Drive isn’t the only area with increased patrols. Even though there shouldn’t be people driving past the roadblocks on each side of Cecil Ashburn, police are patrolling past the barriers to make sure people aren’t trespassing.

“That was kind of important to us to patrol that area after hours,” Johnson added. “When that road was initially built almost 20 years ago, we had a little bit of an issue with young people going up there loitering, hanging out. So we’re monitoring that right now. We do not see a problem at this time. We hope it stays that way. We don’t want anybody getting hurt.”

He says people can be ticketed if they’re found driving past the barriers an it could also be dangerous when crews begin blasting.

The project will be complete in 2020. While it was anticipated to be a nightly traffic nightmare, the Cecil Ashburn rebuild so far has gone better than expected.

The project will not be complete until 2020, but a lane of traffic in each direction is scheduled to be opened by the end of 2019.