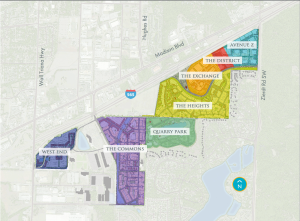 MADISON, Ala. (WHNT) – We’re learning more about what the Town Madison multi-use development will look like. Breland Companies announced Wednesday, they’re partnering with Fuqua Development and other contractors to design the retail mixed use portion of Town Madison.

The property will be split up into six different areas.

Avenue Z will be the entertainment district. The developer describes this area as containing places like a movie theater, upscale fitness facility, grocery store, restaurants and other retail outlets. This space will also feature upscale luxury apartments, that were announced Monday.

The District will feature what Breland officials describe as a “regional premium outlet retail shopping center venue.” No further details were given.

The Exchange is slated to include a traditional “large format” retail space, restaurants and multiple hotels.

The Heights is already under construction as a single family, townhouse neighborhood that will include dining and office opportunities. Developers tell WHNT News 19, it will resemble parts of the Village of Providence.

The Commons will be a future phase of townhouses, that will resemble The Heights.

West End is described as a mixed use retail located on the former Intergraph property, near Wall Triana Blvd. It will also be home to the first hotel at Town Madison with additional shopping, dining and retail to follow.

As more announcements are made, we’ll update you on the WHNT Mobile App.

HUNTSVILLE, Ala. - With a shortage of clean and safe drinking water impacting billions of people around the world, a research team at the University of Alabama Huntsville is pioneering a way to possibly revolutionize the way in which water pollution is detected.

The team is developing a one-of-a-kind system that could be part of solving the growing global issue of access to drinking water.

HUNTSVILLE, Ala. — Huntsville Hospital has launched its new site for people to sign up for their COVID-19 vaccinations.

Click here to visit the site and set up a time for a vaccination at the hospital's John Hunt Park clinic.

HUNTSVILLE, Ala. - Local YouTube creator Michael Pick likes to make his creative dreams come true in his spare time, and is making waves on the internet with one of his latest videos.

The software engineer calls Huntsville home, and aside from his day job at Lockheed Martin, he sets out to make both tiny and giant versions of popular tech items.

Allergy season is getting longer and more intense