HUNTSVILLE, Ala. - The closure of Cecil Ashburn funneled thousands of more vehicles to Governors Drive. While Huntsville Police say they haven't seen as many crashes as they anticipated - people who live there say they have safety concerns. 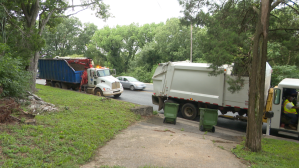 Governors Drive these days, just collecting garbage takes an entourage of vehicles, including a large truck and a police cruiser, to ensure sanitation crews are safe.

Before the closure of Cecil Ashburn, the City of Huntsville partnered with ALDOT to prepare for more traffic. Signal timers were adjusted. The city asked residents to take alternate routes. Police temporarily increased their patrols.

But this family has a different perspective -- the view from their front yard. They moved into a home near the intersection of Governors and Parkhill after Cecil Ashburn closed. 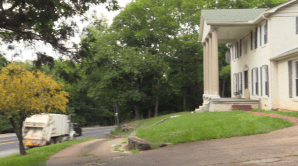 Brianna Boyer and Mark Halpin asked WHNT News 19 for help in May. That's when they told us they worry drivers coming around the curve won't see them when they pulled out -- or while they sit in the middle lane to turn into their driveway.

"It's a bit treacherous, I guess, I would say too and dangerous to pull in and out of the driveway on a regular basis," said Tobiah Walters, Halpin and Boyer's next-door-neighbor.

We have been watching over the past few months. WHNT News 19 has clocked drivers going more than 60 miles an hour in this area of Governors Drive. The speed limit is 35 mph for vehicles driving down the hill. We have also seen many drivers dip into the center lane.

WHNT News 19 put the family in contact with their Huntsville city council representative and a spokesperson from ALDOT. Later we directed them to contact city engineering as well.

In June, we checked in with the family.

"Just anything they could do, even a sign that says blind driveway anything like that. And it was all the same response, 'there's not really much we can do,'" Halpin told WHNT News 19 in June.

Which led us to ask why? Why isn't there much officials can do? And why wasn't a hidden drive sign a viable option for people who live around a blind curve? Trying to get answers to these questions took several weeks and conversations with multiple agencies.

"We're government, we need to give them a clear direction as to what their options are," said Representative Rex Reynolds (R-Madison County).

Representative Rex Reynolds represents this district and told WHNT News 19 the homeowners deserved to know how state and local officials are addressing their concerns. Reynolds is also a former Huntsville Police chief.

"The solution has got to be that we slow the traffic down," Reynolds said.

He also thinks visibility could be improved. But when it came to the idea about the sign... "I just don't think that the sign alone is the one all fix all for that problem. I just think we need to look at all of it," he said.

WHNT News 19 contacted the city's spokesperson. They responded with an email saying quote "The requests would have to be made and managed through ALDOT."

A spokesperson for ALDOT sent WHNT News 19 a statement saying there was no set policy in place to request a hidden drive sign. I also said that there are two different speed limit signs on Governors Drive just before the curve near the family's home. The spokesperson said, "It's our opinion that another sign would provide no additional benefit and would potentially detract from the existing signage."

The spokesperson also said motorists should slow down.

In June, a Huntsville Police Department spokesperson told us if issues with speeding drivers continue they may consider conducting a special operation that uses two officers to run radar.

"We have done that on certain areas in town where it might be unsafe for the officer to run radar and pull out on the target vehicle at the same location and that is something that we can start doing on Governors Drive," Lieutenant Michael Johnson said.

In August, Johnson told us that police are running radar on Governors Drive and have written a few citations over the past couple months.

So, will people follow speed limit signs? Or is the only solution for now flashing blue lights?

Huntsville police say while there are quite a few crashes that take place on Governors Drive - it is not considered a deadly road. There haven't been any crashes this year involving a car making a left turn.

Officials said the call came in around 1:54 a.m. and four trucks responded to the call.

HUNTSVILLE, Ala. - The Huntsville Housing Authority found high levels of radioactive gas inside more than 60 public housing units last fall but never told the tenants they were breathing cancer-causing radon.

An investigation by our news partners at AL.com found that 60 public housing units had high levels of radon but the housing authority never warned tenants of the possible danger.

The parade, which benefits Blount Hospitality House, featured a new route through downtown.