"The promotional artwork for Unimpeachable Pale Ale is intended to evoke the loving care that we have put into each ounce of our latest brew," a brewery spokesperson said in a press release.

The imagery lampoons Bentley’s relationship with his former chief political advisor, Rebekah Mason. Audio recordings of Bentley talking to Mason in intimate terms were made public in the last month, creating a firestorm in Montgomery.

“When naming and branding a beer, we try to come up with names and imagery that are memorable and descriptive of the beer, and feel that Unimpeachable Pale Ale is both.” said brewery co-owner Jay Kissell told our news partners at The Huntsville Times and AL.com.

“The name of our brewery is Salty Nut Brewery - clearly we don't take ourselves too seriously. But we are serious about making good beer,” Kissell told The Huntsville Times and AL.com.

The brewery’s limited-release Unimpeachable Pale Ale will be available at the Salty Nut Brewery taproom in mid-May for on-premise consumption and to-go when Alabama’s new growler law takes effect on June 1. Salty Nut Brewery will be packaging the beer in 32 oz CROWLER® cans.

“It is scary how delicious it is. You’ll worry about loving it so much, baby,” Kissell said.

Kissell says the limited-edition is so good you’ll have to lock the door when drinking it.

“We were so excited that Alabama’s leadership was willing to support this legislation, that we just had to commemorate the moment with something just as sweet,” said Kissell. 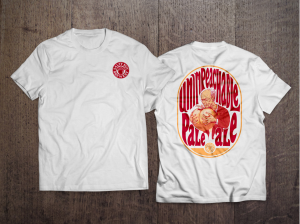 In addition to the limited-edition brew, fans can commemorate the unimpeachable leadership shown by Bentley with t-shirts, posters, and stickers available at www.UnimpeachablePaleAle.com.

House Bill 176, signed into law by Bentley on March 24, allows breweries that make less than 60,000 barrels per year sell up to 288 ounces per customer per day for off-premise consumption, deliver up to two donated kegs of its beer to a licensed charity event, and no longer require brewpubs to open only in historic buildings, historic districts or economically distressed areas.

Salty Nut Brewery released their first beer in 2013. The brewery moved to its current location at 2406 Clinton Ave W in Huntsville in early 2016. Food trucks and special events are scheduled frequently at the taproom. Current schedule of food trucks and other events can be found at www.saltynutbrewery.com, as well as Salty Nut Brewery’s Facebook page.

Brent Cole, the President and Head Brewer of Salty Nut Brewery said, “We believe the new law will have a positive impact on small businesses, economic development, and Alabama’s blossoming craft brewing industry.” Unimpeachable Pale Ale is made with fresh peaches, as well as Idaho 7 hops, which are an experimental hop variety that complement the peaches with fruity aromas of melon and apricot. Unimpeachable Pale Ale is light in color, with 5.5% ABV.

Mayor Battle's office made the announcement Tuesday morning. She was 65.

NORMAL, Ala. — Alabama A&M University has received $3 million from the United States Department of Defense.

The DoD program is aimed at establishing programs to increase awareness of DoD science and technology priority areas to prepare students for technical careers in national security and defense.

HUNTSVILLE, Ala. — UAH President Darren Dawson met with, and apologized to Caleb Crutcher and his parents on Monday following an Oct. 3 incident during which Crutcher was wrongfully pulled over by campus police.

During the meeting Chanda Crutcher watched UAH Police body cam footage of the incident, which has not been released to the public. "All I could think of is what happens, if now my son, who you bullied, intimidated, and now you've taken him in the dark, what if he had thought that I will go home alive, I have better chances of going home alive, if I run, then if I stay here in the dark, with these two men, one of whom has proven that he doesn't have my best interest at heart. They would have shot my baby," said Crutcher.

Gifty: New and unusual pandemic-proof games for the holidays