HUNTSVILLE, Ala. -- Huntsville police continue to investigate the death of a 3-year-old boy in Huntsville.

The two charged with aggravated child abuse are 34-year-old Frederick Antony Frink and 36-year-old Ashley Elizabeth Catron. They have been confirmed as the biological parents of the 3-year-old who died and a 4-year-old boy described as in critical condition, but stable. 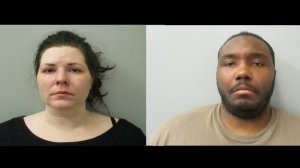 A police source tells WHNT News 19 that the two children appeared to be severely under-nourished.

In a statement released late Wednesday afternoon, Huntsville police steered away from saying the 3-year-old and 4-year-old were starved. They are still considering this a death investigation.

Another juvenile was found inside the home. The 17-year-old is now staying with other family members.

Emergency crews responded to a 911 call on Tuesday at 125 Maple Ridge Blvd for a 3-year-old boy described as "unresponsive." Huntsville police say paramedics were unable to revive the child and he passed away at Huntsville Hospital. The 4-year-old boy is at the hospital recovering.

In a statement released by HPD, they say "Neither child had obvious signs of trauma or visible injuries on the scene. Reports that the children were starved is not a statement being made by any employees of the Huntsville Police Department. At this time this is still considered a death investigation."

Madison County Coroner Tyler Berryhill says an autopsy of the 3-year-old boy was performed and completed on Wednesday. He adds the results may not come back for months.

One neighbor told WHNT News 19 that generally, the community is pretty quiet. "I think it's pretty safe because it's pretty small and there's only one entrance lately," says Dmitri Morse. "Other than the construction happening, nothing is going on."

Neither Frink nor Catron appears to have a prior criminal record in the state of Alabama.

In April of this year, the husband and wife filed for chapter 13 bankruptcy protection. The couple is scheduled to be in court on August 5th for a bankruptcy hearing.

The filing says Frink worked for the TVA as a security guard and was receiving disability payment from Veterans Affairs regarding his time in the National Guard.

The bankruptcy records show that the two have tens of thousands of dollars of debt, most of which appears to be related to medical bills and collection agencies.

Part of the custody process in her previous divorce required both Catron and Frink to be drug tested periodically.

In October 2014, Catron tested positive for benzodiazepine.  This type of drug is similar to Xanax and valium, which is often prescribed to treat anxiety.

It's not clear at this time if drugs were a factor in the current child abuse investigation.

HPD is still investigating and they want the public to know they take crimes of this nature very seriously.

HUNTSVILLE, Ala. - Radiance Technologies celebrated its 20th anniversary with a big move. The company recently moved into a new 104,000 square foot facility that includes modern, advanced and secure workspaces.

To celebrate the opening of the facility, they hosted a ribbon-cutting ceremony on Tuesday. Congressman Mike Rogers, Congressman Mo Brooks, Mayor Tommy Battle, Mayor Paul Finley, and Chairman Dale Strong were among the speakers.