HUNTSVILLE, Ala. – Multiple Huntsville Fire & Rescue crews worked to put out a house fire on the 2000 block of Dellbrook Drive on Sunday night.

The fire began just before 9 p.m. Authorities said it took about 15 minutes to get the fire under control. 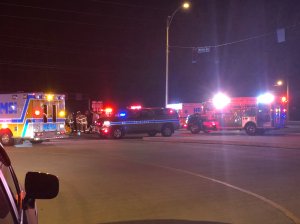 Authorities said there was a man inside the house who was removed from the back bedroom of the house and taken to Huntsville Hospital.

Authorities say a woman was able to get out of the house on her own. Crews also say they were also able to save a dog in the house.

District Chief David Whitman said there is severe smoke and fire damage to the house.

The cause of the fire is under investigation.

HUNTSVILLE, Ala. - With a mask order drafted by the Madison County Board of Health, the Huntsville-Madison County Chamber of Commerce is strongly urging the public to begin wearing masks if they aren't already doing so.

The Chamber said in its weekly Zoom call with members, both Dr. Pam Hudson and David Spillers stated their hospitals are starting to see some strain from COVID-19 patients.

HUNTSVILLE, Ala. - Two people were taken into police custody after a chase ended on North Memorial Parkway.

Huntsville Police say the pursuit started near Haven Inn after they tried to stop the driver for an improper turn.