HUNTSVILLE, Ala. — One employee says HEMSI has been struggling to keep up with the growth of the region, and for the past few years, it’s gotten more difficult to keep up.

WHNT News 19 took the concerns to the CEO of HEMSI, Jon Howell, who says the call volume for Madison County has not changed significantly.

The HEMSI employee did not want to be identified but wanted the concerns to be brought up. “The biggest issue is the city is increasing in size and population,” said the employee. “They’re not adding more trucks. They’re adding more employees but the employees aren’t willing to stay because of the increased call volume.”

Even with the growth of the area, Howell said the call volume has stayed relevantly the same.

“Over the past three years, we’ve really seen our call volume stabilize somewhat,” said Howell. “We haven’t seen a lot of spikes. We might see 10-8% swings in call volume week to week right now, but we are really not going over the numbers.” 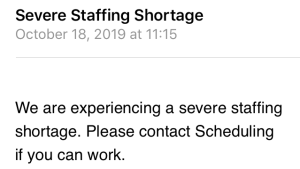 The employee said HEMSI has been sending multiple emails a week regarding the staffing shortage.

He said the shortage stems from the increased workflow, but Howell said much of it has to do with employees currently on leave.

“We have been short of employees lately, but we’ve had a number of people on medical leave so we’ve had people on military leave and those openings have created so challenges for us,” explained Howell.

The employee is asking for those challenges to be addressed.

Howell said the HEMSI fleet consists of 35 ambulances to cover Madison County and they look at the call volume every week. He said when they see a significant increase in calls regularly, they will look into purchasing an additional truck.

He added that they are training a new set of employees this week. “We do have new employees this week though and those are going to help fill in those holes that we have,” said Howell. “Currently on our full-time staffing plan, we’re only six people short.”

HUNTSVILLE, Ala. - The 2020 Census deadline has been extended to October 31st because of COVID-19. For Madison and other North Alabama counties, the extension comes at an important time.

Madison County is at 70.1 percent for self-reporting for the 2020 census. Which now exceeds the county’s 69.9 percent self-response rate in 2010.  However, Madison County’s population has increased 6.8 percent in the last decade, meaning more responses are needed to make up the difference.

HUNTSVILLE, Ala. - Construction on Huntsville Hospital's Orthopedic and Spine Tower has stopped after a worker tested positive for COVID-19.

A spokesperson for Robins and Morton, the general contractor building the tower, confirmed the site shut down Wednesday for cleaning after an employee got the positive test result Tuesday.

HUNTSVILLE, Ala. – A federal grand jury has indicted a Madison man for possessing a pipe bomb.