HUNTSVILLE, Ala. – It is difficult to understand just how a 3-year-old  could fall into a grease trap and drown, but that is what happened at an ice cream shop in Auburn over the weekend.

Video surveillance shows Sadie Grace Andrews playing with two of her five siblings in a picnic table-studded grassy area on the property and apparently falling through the lid.

According to our news partners at AL.com, Sadie Grace was missing for no more than 10 minutes. The Lee County Coroner, Bill Harris, said he believes the grease trap’s lid wasn’t locked or fastened in any way and it opened when Sadie stepped on it. Then the lid closed with her trapped inside. 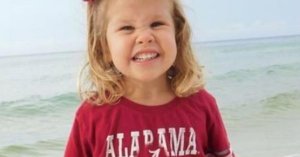 Cook says he doesn't know the layout of the Bruster's in Auburn where the incident happened but he does know enough about grease traps to know something was wrong. "I'm almost certain the lid was not there, or it had been removed previously. There's no way a toddler would be able to remove that lid."

He said those lids can weigh between 70 to 100 pounds. The City of Huntsville has an ordinance that requires restaurants to have a grease trap that is inspected regularly. "A grease trap basically slows down the flow of water. It gives that grease time to float and come together into a location where we can keep it at until it is removed and disposed of properly," he explained.

Cook said every business is different, so grease traps can be located outside or on the inside. "It can be as large as 10,000 gallons if you`re talking about a major cafeteria out in Research Park. In some parts of downtown some might be 50 gallons," he said.

He said grease traps outside are typically five foot deep, but the size depends on the plumping.

Huntsville-Madison County Public Library officials say they are ready for the seven-year project to finally be done, especially after having the North and South Huntsville branches under construction at the same time.

HUNTSVILLE, Ala. - A man was shot multiple times Saturday afternoon in Huntsville.

HEMSI spokesman Don Webster confirmed one person was shot at the Citgo gas station on the corner of Drake Avenue and Patton Road.

HUNTSVILLE, Ala. - It's officially the season of giving, and that means you'll be seeing red kettles throughout the Tennessee Valley, because the salvation army's red kettle kick off was Friday, November 27.

The Salvation Army's red kettles are placed out during the holiday season to raise money and help families in need.