Skip to content
Watch Live
Watch Live
WHNT News 19 at 10:00
This is an archived article and the information in the article may be outdated. Please look at the time stamp on the story to see when it was last updated.

HUNTSVILLE, Ala – Huntsville and Madison County emergency services held a briefing Monday to prepare for the rain moving into the area. They are worried about flooding along the Tennessee River.

HEMSI is prepared to answer calls 24 hours a day because emergencies don’t stop for the weather. They are preparing for heavy rain by packing different supplies like extra linens in their emergency vehicles. Webster says crews are also being encouraged to bring their rain gear to work.

“Unfortunately, it is uncomfortable for our employees sometimes because you get out there and you get soaking wet,” he said.

HEMSI will also be watching the weather because flooding could change where they station their ambulances.

“If we start seeing pockets where there is flooding or areas where it is inaccessible we will make adjustments to what we need to do,” he said.

Along with all of that, HEMSI has their ATVs gassed up and ready to go. They can be used where the ground is muddy or saturated with water.

“In areas where people’s driveways are maybe washed out, or saturated where you know a 12,000-pound ambulance or a fire apparatus can’t get down,” he said.

Webster hopes as HEMSI prepares for this storm in advance, people who live in low lying areas also start preparing for potential flooding before the rain arrives.

Mayor Tommy Battle attended the briefing as well. He wants to remind drivers to give themselves more time to get to their destinations and if they see water on the road turn around, don’t drown.

Ditto Landing is closed for campers 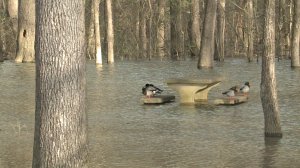 Ditto Landing has decided to close the park to campers. The parking is already experiencing flooding issues. Several picnic tables near the boat harbor are partially submerged under water. The ground is already saturated from previous rainstorms that have passed through North Alabama. Because of that, the water started rising in this area Friday going into Saturday. The team decided to make arrangements to close the park to campers.

“Well, everything is so saturated right now that any huge amount of rain like what they’re talking about is going to affect us tremendously. So, anytime the Tennessee River rises, of course, we’re having to work with that. We close off walkways as we need to and we notify our boaters so that they’re aware of the situation,” executive director Brandi Quick said.

The team at Ditto Landing doesn’t know when they will reopen the campsite. They say it will be when the flooding subsides and debris is cleared away. Quick says they will be asking for the community’s help during the cleanup.

Without an audience, bugler still shows up to Maple Hill Cemetery to honor fallen soldiers

HUNTSVILLE, Alabama - Many Memorial Day ceremonies were either small or canceled in the face of the COVID-19 pandemic. That still didn't stop more than 700 buglers from playing Taps on Monday.

As the clock struck 3:00 p.m., buglers from Taps for Veterans along with countless other Americans took to their front porches, sidewalks, balconies, and landmarks all to pay their respects and honor the men and women who gave their lives for the freedoms we enjoy this very second.