HUNTSVILLE, Ala. – The U.S. Fish and Wildlife Service announced Wednesday that it would protect the habitat of a threatened fish whose only known home is in Limestone and Madison counties.

The spring pygmy sunfish’s home is primarily in Limestone County. The wildlife service announced Wednesday that it was designating 6.7 miles of streams and 1,330 acres of land as critical habitat under the Endangered Species Act of 1973.

The inch-long fish lives currently in the upper Beaver Dam Spring/Creek complex in Limestone County, and in Blackwell Swamp in Madison County. In addition to protecting those areas, the wildlife service also protected a site in Pryor Springs in Limestone County, where the fish used to live and could be reintroduced. 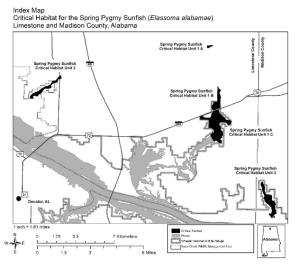 “These habitat protections will help guide the sunfish back from the brink of extinction and onto the path to recovery,” said Elise Bennett, a staff attorney at the Center for Biological Diversity. “After watching these tenacious little fish cling to survival for decades while their springs were polluted and destroyed, it’s a relief to see them finally get the safeguards they need.”

The center sued the wildlife service last June, claiming that the fish’s habitat was in danger of being destroyed by the construction of a massive automobile plant for Mazda Toyota North America.

Mazda Toyota placed money in an endowment fund to help conservation efforts for the sunfish.

HUNTSVILLE, Ala. - Huntsville's Terry Willis, the man who embarked on a one thousand mile trek to Minneapolis, is just 100 miles of completing his goal.

He's walking for change, justice, and equality. Willis is marching straight to the heart of where George Floyd died after he was no longer able to breathe as a Minneapolis police officer knelt against his neck.

MADISON COUNTY, Ala. - Madison County Sheriff Kevin Turner made a statement on Facebook sharing exactly how his deputies will handle people who don't follow the mask order.

The sheriff says rather than punishment--- they want to educate and communicate with the people of Madison County just how important it is to wear a mask.

HUNTSVILLE, Ala. - Some will say it takes a lot to keep teachers out of the classroom. It's these very people along with their students and families that face risks as schools prepare to reopen.

Uniserv is an education association and is actively working with Alabama school districts to make sure their COVID-19 plans best serve students but also the staff and teachers that help develop our future generations.