HUNTSVILLE, Ala. – A new downtown development that will feature new restaurants is almost complete.

The development, known as 127 Holmes, is at the corner of Holmes Avenue and Spragins Street. It will feature a Moe’s Original Bar B Que with a rooftop bar, two other restaurants with rooftop bars on both the back and front of the building, and several floors of what developers say will be the largest office space in downtown Huntsville. 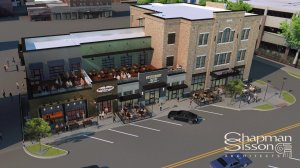 “We’re kind of in the middle of everything, and feedback’s been really good so far,” said managing partner Rahul Arora. “I’d say by August, all of this will be fully open and operating as restaurants. That’s the goal.”

Developers say the Moe’s is nearly done, and crews will begin work on the interior of the next two restaurants in the next few weeks.

HUNTSVILLE, Ala. - Elon Musk and SpaceX are on the clock with the launch of Falcon 9 coming Wednesday, barring potential weather delays. If the launch carrying Crew Dragon is successful, it will mark the first time a manned spacecraft is launched by a private company.

It will also be the first manned launched on U.S. soil since 2011.

HUNTSVILLE, Ala. - There's a community movement to save Hockey at UAH. Organizers say all it will take is $500,000 of donations from the community.

This after UAH Announced the elimination of its hockey program last Friday.

HUNTSVILLE, Ala. - Rosie's Mexican Cantina closed its South Memorial Parkway location on May 15th after learning an employee tested positive for COVID-19. But in a post on Tuesday, May 26th, the restaurant reported that two more employees tested positive for the virus.

Rosie's originally planned to reopen it's South Parkway location on May 27th after extensively sanitizing the entire restaurant. But now, the popular cantina plans to reopen on Monday, June 1st at 11:00 a.m.