ATLANTA, Ga. (CNN) — We’re world-class, Greater Atlanta boasts. We’re home to the world’s busiest airport, to the Braves and Georgia Tech. To CNN and the Weather Channel. We’re a mecca for conventioneers. We hosted the 1996 Summer Olympics.

Today, that solid rep is going south, thanks to the “rush hour from hell.”

Snow fell in Atlanta on Tuesday, leaving a couple of inches on the region — an event that would be a minor inconvenience for communities in the Northern climes. But the white stuff and the icy streets it spawned stirred a panicky, community-wide exodus toward home. As night fell, the city’s busy interstates became parking lots. It left homebound folks stranded in their cars and anxious kids sheltering in their schools overnight.

How can this happen in and to a world-class region? One answer: It was poor planning and panicky citizens who don’t know how to deal with the snow. Another: That’s just the price you may have to pay for living in Atlanta, famous for its traffic frustrations. Misleading weather forecasting is another answer. And some say it’s because everyone departed their schools and offices at the same time.

Honoré: Mother nature had a vote

“This area does seem to suffer from a deficit of leadership and total lack of regional planning,” one person said on Facebook. “And terrible drivers,” another said.

On Twitter, many say they don’t understand why Atlantans can’t drive in a few inches of snow. One guy on Twitter defended the hapless commuters. “What you don’t realize is that Atlanta doesn’t usually get snow so ppl don’t know how to drive in it.”

Where was the plan?

Stuck for hours in traffic, Matthew Holcomb, a vice president of engineering at CNN, underscored that point. He wants to know, “what was the plan?”

“I mean, two or three weeks ago, the kids were let out of school when it got cold here. Knowing what was coming, I can’t believe they didn’t have the kids out of school and there wasn’t a better plan on the roads.”

He said he hasn’t seen a snowplow “or anyone slinging sand.”

One Facebook post, addressing “Yankees laughing at GA for being shut down by two inches of snow,” had an answer for the salt truck issue: The gridlock slowed down the salting.

“At noon, it started snowing. All of the schools, at once, decided to close without any advance notice around 1:30. It was basically, ‘Hey, we’re closed now! come get your kids!'”

And around the same time, most businesses closed.

“So that’s roughly 5 million people who all got on the roads at the same time, which clearly caused a massive traffic jam. Then, while they’re out there, the snow gets worse, turns into slush, and then, eventually, full-on sheets of ice. And, while everyone was in gridlock, they couldn’t reload the salt trucks because the gridlock was too thick to navigate back to the salt storage areas (we have 30 trucks & 40 plows in ATL proper),” the Facebook post said.

Children stuck in schools, on buses

“So the ice situation got worse and worse, until short trips became hours-long and some folks ditched their cars and walked.”

That writer noted that a “good number of kids and staff” spent the night at their schools. “There’s too much ice for the buses to run safely to take them home.” 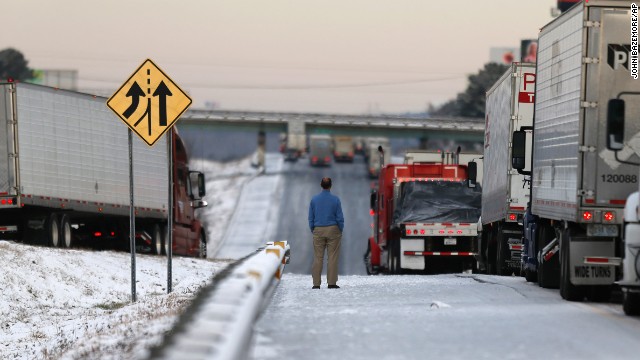 Ken Davis, a spokesman for the Georgia Emergency Management Agency, told CNN’s Wolf Blitzer the problem is “an ice situation.”

“It’s not snow, it’s ice, and the temperature is still below freezing, so there’s not been any melting. And the considerable salting and deicing equipment that’s operated by the local and state agencies basically is not able to get out because of the impasse on the interstates, but we’re trying as best we can to get the roads clear, or at least a passageway through there, so the icing equipment can get out. And hopefully things will get rolling again.”

Atlanta Mayor Kasim Reed also weighed in. He laid part of the blame on local businesses, saying they contributed to the gridlock by letting workers leave at the same time. When the snow started, he said, with schools and businesses releasing people simultaneously, it was too much for the roads to handle.

“I said immediately yesterday that releasing all of these folks was not the right way to go,” Reed told CNN’s Carol Costello. “If I had my druthers, we would have staggered the closures.”

Georgia Gov. Nathan Deal said the region was caught off guard by weather predictions. During a Tuesday night briefing, the governor called the weather event”an unexpected storm” that hit the metro area. Citing forecasts, he said most of the effects of the storm would be south. He also said people leaving for home “at the same time” contributed to the gridlock problem.

“The National Weather Service continually had their modeling showing that the city of Atlanta would not be the primary area where the storm would hit, that it would be south of Atlanta. You’ve already heard some of our agencies saying that based on that modeling, they had not brought in some of the resources earlier because they thought there were going to be other parts of the state that were going to be more severely impacted than the metropolitan Atlanta area.”

“Some of the local meteorologists were more correct on their predictions, that the storm center might be 50 miles north of where the National Weather Service’s modeling had indicated that it would be,” he said.

The offices of the governor and the mayor confirmed the men were at a luncheon in Atlanta around noon Tuesday. Anne Torres, Atlanta’s deputy communications director, said Reed accepted an award from Georgia Trend magazine as 2014 Georgian of the Year.

When asked about the governor’s comment the storm was “unexpected,” Torres said she couldn’t comment on the remark but that the mayor’s office was “prepared” and “aware.”

The governor’s spokeswoman, Sasha Dlugounski, said Deal had been kept up-to-date on conditions and cleared his schedule after the award presentation.

Yvonne Williams, who works on transportation infrastructure projects in Atlanta, said there needed to be a community-wide coalition of first responders ready to take this on.

“If I were a leader for the day, I’d make sure everyone is organized together, preparing for these kinds of emergencies,” she said.

Many Atlantans say there needs to be more mass transit and roads.

Public transit, they say, isn’t as wide-ranging as it is in other cities, like New York, or overseas, in London. But a transit tax proposal failed recently. Many people just don’t want to spend the money to expand the region’s MARTA train system.

Liane Levetan, a former Georgia state senator, is one of the many Atlantans who wants more rail and road modifications. She thinks the gridlock could turn out to be a “godsend.”

“You’ve got to have more transportation available. We really are a metropolis now,” she said.

She points out that bad traffic is an “everyday situation” Atlantans endure.

“For us to be forward thinking, maybe this will be the catalyst. We’re being penny wise and pound foolish. If we want to be growth leaders, people have got to move around,” she said.

John A. Williams, a native Atlantan and CEO of Preferred Apartment Communities, has a decidedly different take. Maybe more can be done to improve transportation in Atlanta, but he’s not sure there could be enough money to address a problem like this one.

“Every decade, we have a storm like this,” he said. “I’m not sure there could be enough money to spend to solve the problems.”

And, he says, traffic is a good thing, a solid indicator of growth. In fact, when you weigh the positives and negatives about Atlanta’s sprawl and the tightly packed populations in many cities, the region has its pluses.

“Atlanta is a city without natural boundaries, Atlanta has grown greatly in every direction, south, north, east and west. Atlanta has a certain amount of sprawl. It is difficult to serve that sprawl with mass transit,” he said. “Atlanta is a city of trees and hills. People don’t necessarily want to live in Chicago, highly dense urban environments.”

As for Reed, he gave the region’s response a good grade during his sometimes testy exchange with Carol Costello on “CNN Newsroom” Wednesday morning.

“We got a million people out of the city,” Reed said. “We have not had any fatalities. We cleared the way of all of our hospitals, all of our police stations.”

Costello cut in to say, “Well, I heard this from public officials before, ‘We didn’t have any fatalities,’ but that was just by the grace of God. There were a thousand traffic accidents. People got out of their cars on icy roadways in frigid conditions to walk home.”

“That’s easy to say from your anchor seat,” Reed said.

“No, I was out stuck in the traffic,” Costello said. “I was one of those people.”

For now, people have to drink up an unfamiliar cocktail of Atlanta traffic and southern snow.

“Snow in Atlanta, I couldn’t make it to the liquor store,” one guy quipped on Facebook. “So we may have to survive on food and water for several days.

Could “the rush hour from hell” and other chaos in the South have been prevented? We want to know what you think. Post your comments on our Facebook page. We’ll share some of your thoughts in our News Pulse at 9.

ATHENS, Ala. - Noah Basketball was an idea that started in a driveway. Now, more than 2/3 of the NBA uses its data and analytics to help players improve their shot.

Noahlytics will give players and coaches data in real-time and coach users through speakers.

CHICAGO (NewsNation Now) — An investigation found that more than 75,000 complaints about the Seresto brand of flea and tick collars have been sent to the Environmental Protection Agency. Investigators have linked the deaths of nearly 1,700 dogs and cats, according to a report co-published by Midwest Center for Investigative Reporting and USA TODAY.

The collars use two types of pesticides to kill fleas and ticks. The EPA said the collars are safe but that some pets may be sensitive to the pesticide combination.

HUNTSVILLE, Ala. - Hunter Pepper, Decatur's 19-year-old District 4 city councilman is apologizing after Bama Politics unearthed a post that 16-year-old Pepper made that referenced running over protesters.

"It was me sharing an article from Al.Com. I can't remember what the article is and I do not remember the exact quote that I have on there. I will tell you if I'm not mistaken, there's nothing in that post that mentions race whatsoever," said Pepper in a statement before taking questions from the press.

‘Everyone needs to have a gun’: Tennessee permitless gun bill advances