SHARE
This is an archived article and the information in the article may be outdated. Please look at the time stamp on the story to see when it was last updated.
OWENS CROSS ROADS, Ala. – It’s the time of year where houses all across the country put up Christmas lights and share their creations with the community. One north Alabama display does things a bit differently. In addition to buying lights from big name stores, the Hall Family Light Show builds some of the items in their display themselves. As WHNT News 19 previously reported, the show added a Christmas house this year. But the Christmas house has one special trait – it’s homemade. It’s all part of what Nick Hall says makes their display unique and different. The light show opened up Thanksgiving night, with the lights brightening up Cove Valley Drive starting at 5 p.m. Hall estimates 500-1000 people showed up, saying the turnout was better than expected. “We had great weather [Thanksgiving] night, so that could’ve been a huge part in it.” Hall said there were a few problems trying to make old and new technology sing, but everything worked out in nick of time. And with new technology, Hall said each light can be controlled individually. “The whole display is ran on a computer and so we control you know pretty much all the lights some of the lights are new technology so you can actually control each individual bulbs and create some cool effects.” At the end of the day, Hall said the goal is to give back to the community. Through Cocoa for a Cause, the family collects donations for local charities on certain dates. “We give out the free hot chocolate and cookies and then we ask for donations if people feel honored to do that. This year we’re doing it again for Kids to Love. The ultimate goal is just to spread Christmas cheer and have the community engaging in the display and making family memories.” Cocoa for a Cause is set for Dec. 21 from 6-9 p.m. Santa will be there, too! He gets to Owens Cross Roads at 7 p.m. On Dec. 20 and 23, the show will also host hot chocolate nights, with free hot chocolate and cookie decorating for the entire community. If you head down to Owens Cross Roads, there’s a traffic pattern you should be aware of. 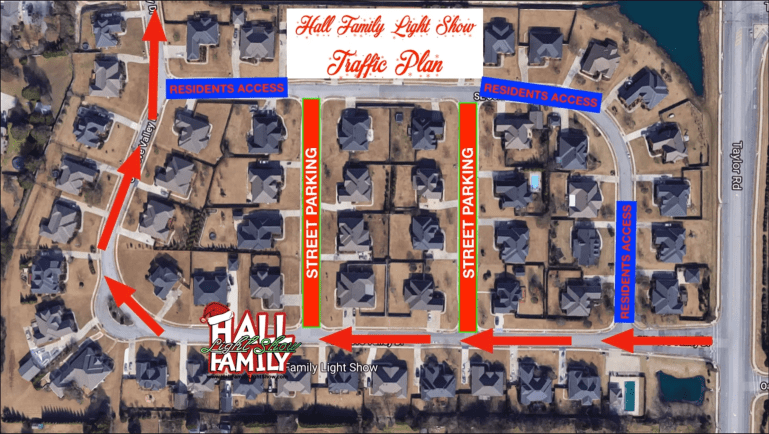 From Taylor Road, turn onto Cove Valley Drive. If you’re driving on through, continue west on Cove Valley and follow the road as it turns north. Street parking is available on  Cove Meadow Drive (second right) and Laura Brooke Drive (third right). Jenna Circle (first right) is restricted to residents only. For updates on show times and weather closures, follow the show on Facebook.
34.64333-86.487611

3 North Alabama murderers up for parole

3 North Alabama murderers up for parole

Preparing the Blood Supply Ahead of Hurricane Ian

20th annual ‘I Golf Because I Care’ fundraiser tees …

Instead of gifts, girls want donations for birthdays