LOS ANGELES (AP) — The grandparents of 13 starved and tortured children say their son’s family looked happy and healthy when they last visited California six years ago.

“They were just like any ordinary family,” said Betty Turpin, the 81-year-old mother of David Turpin. “And they had such good relationships. I’m not just saying this stuff. These kids, we were amazed. They were ‘sweetie’ this and ‘sweetie’ that to each other.”

Betty Turpin and her husband James Turpin of Princeton, West Virginia visited her son’s family for five days at their previous home in Murrieta, California.

Betty Turpin told the Southern California News Group on Wednesday that they are still in shock from learning that her son and his wife were arrested this week, their children, ages 2 to 29, found malnourished with some in shackles. 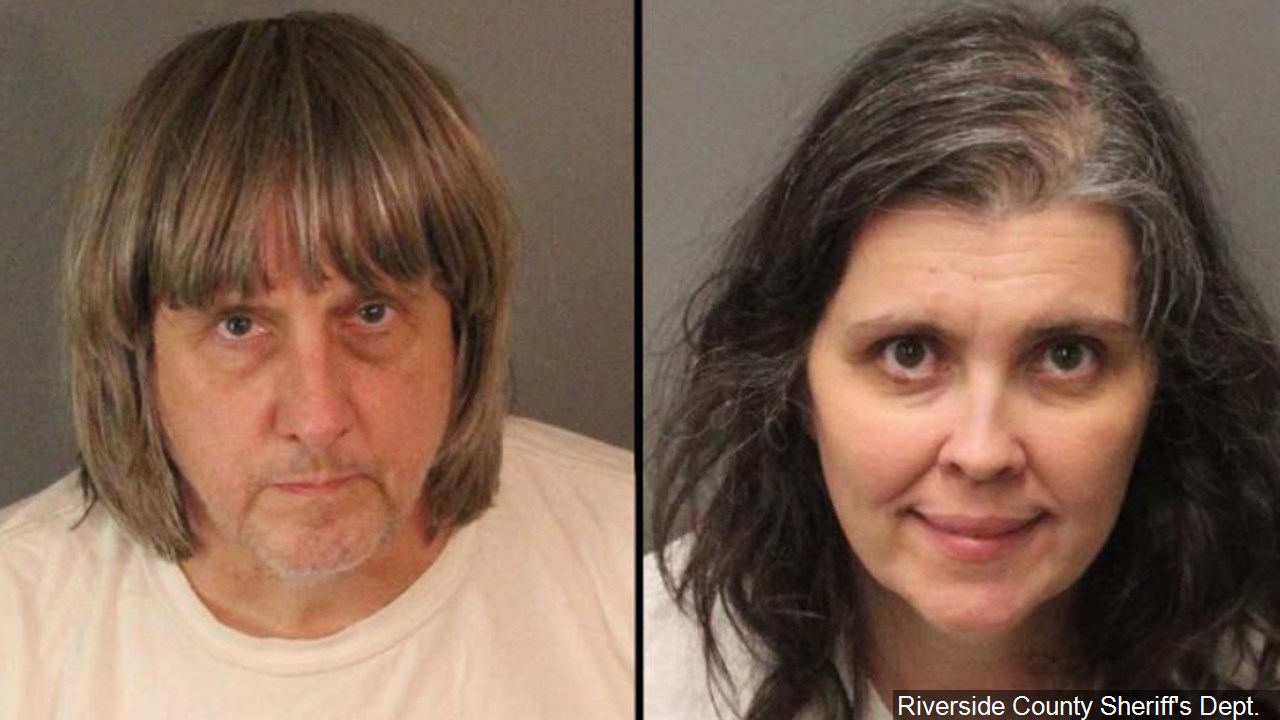 David and Louise Turpin, jailed on $9 million bail, are expected to make their first court appearance on Thursday, and could face charges including torture and child endangerment, authorities said. Prosecutors plan a news conference for earlier in the day.

Betty Turpin said her son told her he had so many kids because God wanted him to. She said her son shared her Pentecostal Christian faith but he wasn’t affiliated with a church in California.

“I feel they were model Christians,” she said. “It’s hard to believe all of this. Over the years, the Lord knows what happened.”

James Turpin said during their visit, “the all looked to me well-adjusted. They weren’t skinny or nothing. They were joyous to see us.”

He said they were dealing with social workers in attempting to connect with their grandkids, who are hospitalized as they recover from their years-long ordeal.

On Wednesday, authorities searched the couple’s current home in Perris, 60 miles southeast of Los Angeles, where one of the daughters, a 17-year-old jumped out the window and called 911 on Sunday. Investigators removed dozens of boxes, what appeared to be two safes and pieces of a bed frame.

Some siblings were shackled to furniture in the foul-smelling four-bedroom home that looked perfectly normal from the outside.

The Turpins have lived in two Riverside County communities since moving to California in 2011, and police said they were never called to either home, nor were any reports fielded by child protective services.

It’s not clear what motivated the Turpins to live a secluded life with their large brood or what went on in the house.

Nor is it clear why the teen girl fled when she did, breaking a silence that had likely lasted years.

Psychiatrists say that even in cases of extreme deprivation, it’s common for feelings of helplessness or confusion to lead to staying in place despite opportunities to flee.

“This happens all the time. The number of individuals who would immediately respond to an opportunity where they could get away is very small compared to the number of people who would have that paralysis and insecurity and confusion about what to do,” said Dr. Bruce Perry, a psychiatrist and senior fellow at The ChildTrauma Academy in Houston.

The vulnerable girl might have been shamed, beaten or threatened with violence and only after many missed opportunities did she probably work up the courage to act, Perry said.

“It’s pretty remarkable that she’d do that,” he said. “The power that must have been exerted to keep an entire family like that for so long must have been pretty sophisticated.”

MONTGOMERY, Ala. (WIAT) — Saturday, Gov. Kay Ivey tweeted a thank you to Apple CEO Tim Cook after he made a generous donation of thousands of masks for medical staff employees in the state of Alabama.

Many companies are quickly planning for employees to work from home, and others are fast-tracking policies to meet the requirements of shelter-in-place orders issued by state officials. These actions are making it an even higher risk of people being targeted by scammers, especially through phishing emails or through an unsecured network connection.

Transitioning from an office setting to home, many may find themselves more vulnerable to tech support scams. With limited IT resources available, employees may attempt to solve technical issues themselves when confronted with pop-ups and virus alerts. BBB Scam Tracker received a report of a victim losing nearly $250 to a tech support scam. The report stated a pop-up window appeared when the user's computer froze. The instructions on the pop-up window said to contact a company claiming to be affiliated with Apple. After following the directions, the consumer paid for what they thought would fix the problem and never heard from the tech support company again.

In North Alabama, invitations to complete the 2020 Census began arriving in mailboxes on March 12. If you haven’t received the invite already, it will be arriving before April. If you fail to complete the 2020 Census by mail, phone or online by the end of April, you can expect an in-person visit by a legitimate Census Bureau representative in May.