FLORENCE, Ala. – An early Wednesday morning shooting in Florence has first responders in the Shoals thinking of one of their own. A 911 dispatcher in Colbert County was shot in what appears to be a road rage incident.

Florence police say they don’t have a lot to go on. Right now they are depending heavily on the accounts of the victim’s boyfriend, who was also driving the car 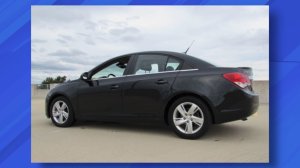 which was shot into.

This is a picture of a vehicle which police say closely resembles the one they are looking for. It’s a dark-colored Chevrolet Cruze and could be as old as 2008.

Florence police say they got a 911 call just after 1:15 Monday morning. A female had been shot and was being transported to ECM Hospital by private vehicle. According to investigators, she was shot while in the same car sitting on Malone Circle.

Investigators say the victim is Cassie Sartain, a 911 dispatcher in Colbert County.

Her boyfriend told police they were confronted by someone in the Chevy Cruze near Cox Creek Parkway. The assailant’s vehicle followed them to Malone Circle and that’s when police say someone jumped out of the car and began shooting towards Sartain. One bullet hit her in the throat.

At last report, Cassie Sartain had made it out of surgery and was recovering at Huntsville Hospital. Police are still trying to locate the suspects. Sergeant Greg Cobb said Sartain was in good condition, during a news conference July 5.

"She is in good condition. I did talk to her parents last night. She is in ICU," Cobb said. "We're hoping we can talk to her today when she gets put in a regular room."

ORLANDO -- Walt Disney World announced on Wednesday it will begin opening its theme parks on July 11.

Disney presented its plans for reopening after being shuttered along with Florida's other theme parks since mid-March because of the new coronavirus.

Disney said it will open the Magic Kingdom and Animal Kingdom on July 11. Epcot and Hollywood Studios will open on July 15.

(CNN) -- About 24 hours after George Floyd's death, hundreds of protesters packed the streets of Minneapolis, many gathering at the intersection where Floyd was pinned to the ground by police officers shortly before he died.

Floyd was arrested Monday evening after officers responded to a call about an alleged forgery in progress. Video from bystanders shows Floyd handcuffed and pinned to the ground and one police officer's knee pressing against his neck. Floyd pleaded he was in pain and couldn't breathe. Shortly after, he died at a nearby hospital.

SACRAMENTO, Calif. (KTXL) -- A body pulled from a river in California on Tuesday matches the description of a missing 5-year-old boy.

Rescue crews had been searching for Ziyon Butler since Monday evening when he went missing at a Sacramento beach.

Antibody tests for COVID-19 wrong up to half the time, CDC says