LAWRENCE COUNTY, Ala. – Authorities in Lawrence County are still searching for the person responsible for shooting and killing a man in the Red Bank community north of Town Creek early Sunday morning.

30-year-old Akeem Montez Koger was shot and taken to Helen Keller hospital in a car, then later died of his injuries.

Police still haven’t made an arrest but his mother believes someone knows who took her son’s life.

“With that many people there and so many of them that were supposed to be his close friends but nobody is helping us,” said Akeem’s mother, Kim Koger. “Nobody is speaking up.”

Kim Koger says to make matters worse, when her son arrived at the hospital he had no personal items and she believes someone took them. 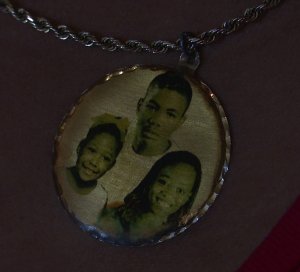 “His wallet, his jewelry, especially the medallion with his brother and sisters on it. Someone has them and I just want them back.”

Kim Koger says she is unfortunately familiar to the heartbreak of losing a child. Her other three children died in a car accident in 2004. She says Akeem’s missing medallion is special, he wore it to remember his siblings.

“I never imagined having to go through this pain again, I wouldn’t wish this on anyone,” says Koger.

Kim Koger says she’s not sure what led to the shooting but nobody deserves to die from senseless violence.

Akeem Koger leaves behind three children, family and friends far too soon. While Akeem is no longer here, his family says his memories always will be.

“He was a hard loving person. He did whatever he could for anybody. He loved his kids,” says Koger.

Akeem’s family is begging anyone with information to come forward to law enforcement. They say the personal items can be returned to them with no questions asked, they just want the items back.

FORT LAUDERDALE, Fla. (AP) — The U.S. Navy is investigating an incident in which dogs attacked a “Colin Kaepernick stand-in” during a K-9 demonstration during a 2019 fundraiser at the Navy Seals Museum in Florida.

The Navy said in a statement posted on Twitter that officials became aware of the video on Sunday.

(WHTM) -- Retired Maj. Bill White, the oldest living Marine, has seen a few things throughout his years -- all 105 of them.

Family and friends celebrated his 105th birthday Friday with a drive-by birthday salute.

MOBILE, Ala. -- An Alabama man woke up recently and found an alligator in his swimming pool.

"What in the blue blazes is this?" homeowner Steven Mculland said in a video Friday. "I took my glasses off and looked around and made sure I was seeing what I thought I was seeing, and I was."