Hawaii Governor David Ige confirmed that an emergency alert about a missile threat to the state was a false alarm. The alert went out Saturday morning, saying there was an inbound ballistic missile threat to Hawaii. The message also told people to seek shelter right away - and that it was not a drill. 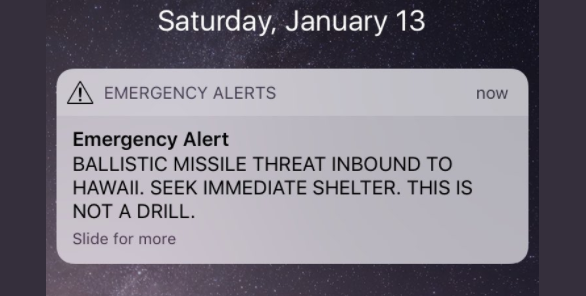 Governor Ige went on to say the message was an error caused by someone pushing the wrong button during a shift change.

"What happened today was totally unacceptable and many in our community were deeply affected by this and I'm sorry," said Governor Ige.

The alert sent many islanders into a state of panic. Residents in the Tennessee Valley also felt helpless as their loved ones were in Hawaii.

Florence native Kelley Choat lives in Hawaii and quickly called her mom after the message was sent out.

"My mom was on speaker phone and I was crying. I figured that was the end," said Choat

Choat said she's angry that they weren't alerted to the false alarm sooner.

"There's 1.5 million people on this island... and you're going to panic all of these people with no place to go. And then wait 37 minutes to reissue the 'oops my bad,'" said Choat.

In Huntsville, Priscilla Oaks had no clue what was going on until her daughter called her. Oaks said she felt helpless knowing that her daughter Angelina, her grandchild and son-in-law were in Oahu, and there was nothing she could do.

"I didn't feel anything until she called me back and said 'I thought it was my last time talking to you'. That's when it was real," said Oaks.

The incident comes as tension remains high between the United States and North Korea. North Korean President Kim Jong-un claims to have ballistic missiles capable of reaching Hawaii and the continental U.S.

ROCK HILL, S.C. (WJZY) – A couple charged with the death of a 4-year-old girl found “stuffed in a drawer” in Rock Hill, South Carolina were both denied bond Wednesday.

Jackleen Mullen, 23, and her boyfriend Audrevious Williams, 26, are both charged with homicide by abuse or neglect. Around 11:30 p.m. Tuesday, police were called to a home on Gentle Breeze Lane in Rock Hill.

SAN FRANCISCO (KRON) - As states begin to loosen business restrictions amid the coronavirus pandemic, many businesses are starting to reopen and resume in-store shopping.

TJX Companies, the parent company of TJ Maxx, Marshalls, and HomeGoods announced this week that it expects most of its stores to be reopened by the end of June.

SOUTHWICK, Mass. (WWLP) - A Massachusetts resident got creative while staying at home during the COVID-19 pandemic.

Sean of Southwick created the bat signal in his back yard on Wednesday and told 22News, "he hopes he comes to save the day or year."