MADISON COUNTY, Ala – While there are numerous regulations to buy and sell firearms, the only thing a Madison County resident needed to build a shooting range – was a business license. That’s it.

A new shooting range is opening its doors Saturday on Hobbs Island Road. The owner says despite the lack of regulations regarding safety, he is making safety at the range a high priority. 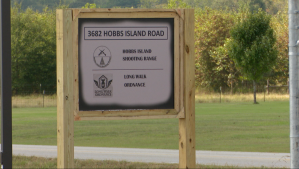 “People hear there is a shooting range being built out here this is not what they picture,” said Don Eiermann, owner.

Eiermann says even though his range isn’t what people picture, it’s picture-perfect. The range is the culmination of 8 years of planning, but he says when it came to regulations to build the range he didn’t hit many roadblocks.

“Business license and then we also we took a look at EPA requirements that’s only the thing that really impacted us,” he said.

He says he didn’t encounter any regulations regarding safety.

“There isn’t a whole lot of range regulations around here, but what we did is we pulled the National Rifle Association’s range guide which is pretty much a national standard for those places that don’t have standards,” he said.

He worked with an engineer to build the range.

“We pulled some DOD regulations I think he pulled a Department of Energy regulation and we even pulled Canadian regulations,” he said.

He hopes his attention to safety sets his range apart from others in the area. 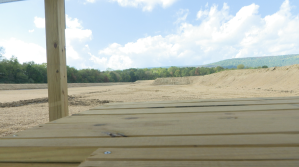 From some of his unique range protocols to design features

“On the firing line here you’re not allowed to have a cell phone because I don’t want a distracted shooter.”

Impact berms separate a long-distance range, a pistol range, and a competition training box. The berms are 20 feet high and 40 feet deep at the base it took 90,000 cubic yards of dirt to build the range. The berms can stop a speeding bullet.

The berms are also where the EPA regulations tie in.

“You don’t want high concentrations of lead in the berm so every so often we’ll hire a company to come in here. They’ll put a probe in the berms and tell us if we have exceeded that threshold, and if we have, we’ll pull the dirt out, recycle it and put it back,” Eiermann said. 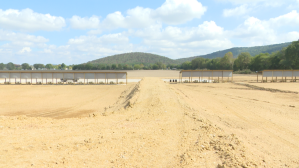 And everything happening inside the berms will be watched from a birdseye view.

“I got surveillance all over this field,” he said. “We just want to make sure people are being safe and following the rules.”

Smile – customers will be on camera, but Eiremann hopes they’re smiling because his range has made its mark.

In addition to the shooting range, customers will be able to rent and sell firearms on the premises.

Some neighbors have voiced concerns about the amount of noise that could come from the outdoor shooting range.

Eiermann says the range is built to absorb as much as the noise as it possibly can. “Eventually we do hope to put up some vegetation. I’d like to put up trees that maybe will also be able to contain some sound.”

While Madison County voters voiced that they would like the Madison County Commission to draft a noise ordinance last year, an ordinance has not been written. Commissioners have told WHNT News 19 in the past, the ordinance would not be intended to stop businesses, like the shooting range, from being able to operate.

Police in Italy have identified a 50-year-old Austrian man who broke three toes off a statue at a museum as he posed for a photo with the artwork.

The 200-year-old plaster cast model of Antonio Canova's statue of Paolina Bonaparte was damaged in the incident on July 31 at the Gipsoteca Museum in Possagno, northern Italy, Treviso Carabinieri, the local law enforcement agency, told CNN.

ST. LOUIS -- Skyrocketing demand is wiping out Clorox disinfecting wipes, and they won't be fully restocked until next year, according to the company's CEO.

"Disinfecting wipes, which are the hottest commodity in the business right now, will probably take longer because it’s a very complex supply chain to make them," Clorox CEO Benno Dorer told Reuters.