HUNTSVILLE, Ala - Many members of the Camelot Recreation Association have been asking about their neighborhood pool. It has been closed multiple times due to unsafe chlorine levels.

It turns out, in the state of Alabama no government agency regulates chemical levels at community pools.

But Camelot has popped up on the government's radar. Last month, an anonymous tip was filed with the Department of Labor alleging the water is unsafe for the teens who work there.

Members at the Camelot Recreation Association have been worried about chlorine levels all summer.

The pool was closed multiple times at the beginning of the season due to levels that were not consistent with CDC regulations. On July 6, a complaint was filed with the Department of Labor alleging the water isn't safe for the teens who work there.

A complaint was filed against the Camelot Recreation Association with the Department of Labor alleging the water is unsafe for the teenagers who work there. @whnt pic.twitter.com/wsjpfwdZMp

"Absolutely false, absolutely false. We spoke to the man at the labor board. He has pictures of all of our from Leslie's showing our chemical levels. Those have been sent to him," Board President Kari Nabors said.

WHNT News 19  received a statement Thursday from the Department of Labor saying they are asking for records of the pool water testing and will conduct a follow-up visit next week.

The chlorine level was 14.8. The test was taken from a board member who has since resigned. 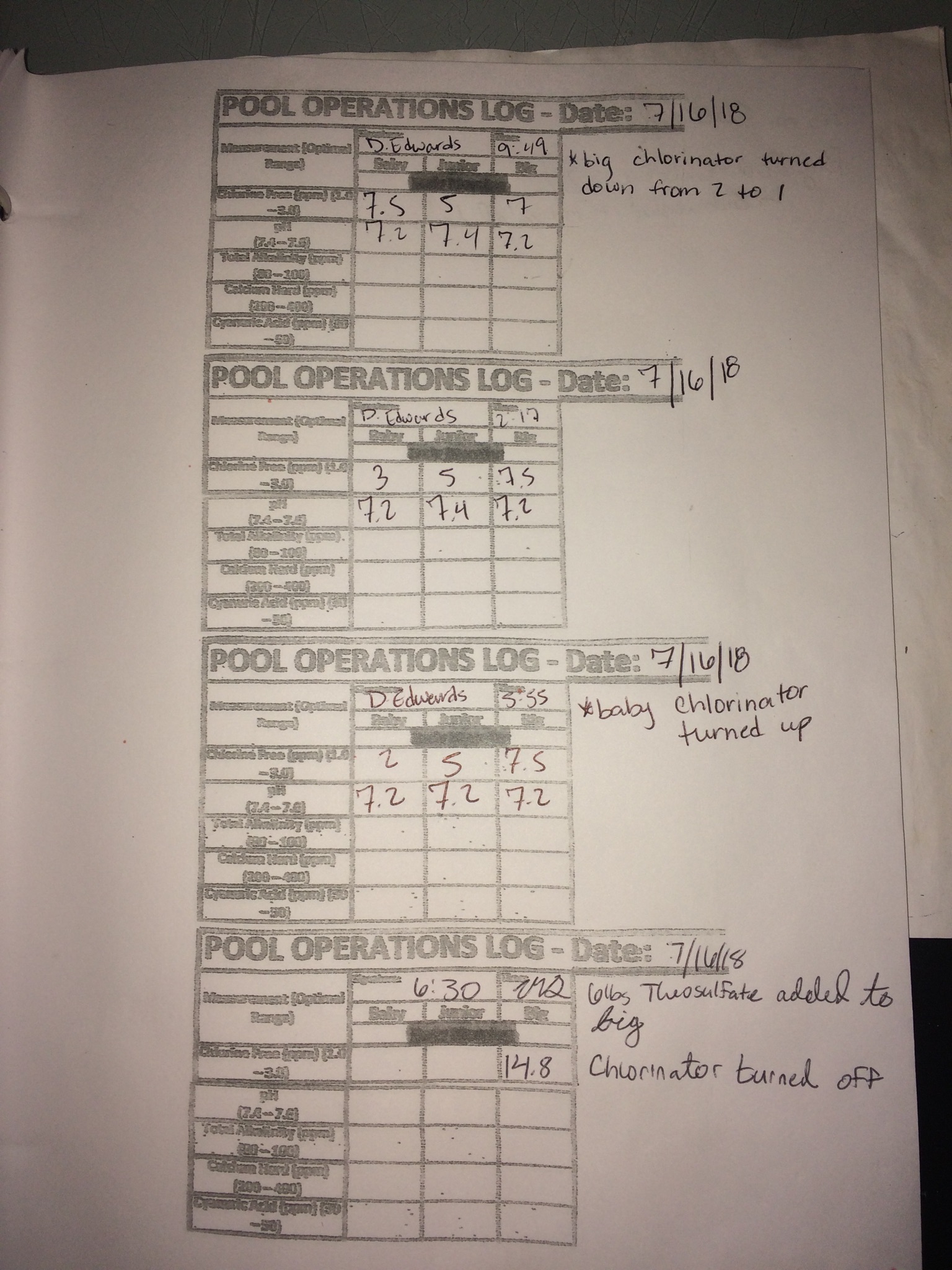 "That test was taken in front of two jets in the pool and that is never an area that is supposed to be tested. At the water sample the chlorine is more concentrated coming out of the jets," Nabors said.

She says the water was retested the next day and the reading showed the chlorine level was 10 parts per million.

Nabors says this is the first year the pool has had this problem.

"There has been a lot of misinformation and a lot of things being said to some of our staff on how to do some of the testing that was not accurate."

She says they have hired a certified pool operator who is now overseeing testing at the pool. The last time the pool was closed for meeting CDC standards was July 5th.

ADOL officials say unless it is something on their prohibited occupation list, they do not generally fine on their first encounter. They consider the first encounter a training. They ask anyone who is concerned and has information showing the pool isn't safe to come forward.

If it is shown that the Camelot Recreation Association has disregarded the instruction from the ADOL they could face a fine ranging from $1,000 to $5,000.

After the complaint was filed, the ADOL officials discovered the Camelot Recreation Association's Child Labor Certificate to employ 16 and 17-year-old kids expired in June of 2017.

The association renewed the certificate the same day they were notified it was expired.

MONTGOMERY, Ala. — State health officials say trunk-or-treat events and haunted houses are among the Halloween activities most likely to facilitate the spread of COVID-19.

Families should consider safer activities this holiday season to prevent the spread of the novel coronavirus, the Alabama Department of Health said Tuesday, including alternatives to traditional door-to-door trick or treating.

MARSHALL COUNTY, Ala. - A man has been charged with criminal mischief in connection with an incident involving an inflatable screen at a rally for the removal of the Confederate flag outside the Marshall County courthouse in Albertville.

While many of Say Their Names Alabama's protests have been peaceful, last week's ended in the destruction of property by counter-protestors.

NAPLES, Fla. (WJW) -- A Florida man accused of using a Kool-Aid packet to ring up nearly $1,000 worth of merchandise at a Florida Walmart has been arrested.

Bradley D. Young, 37, who is also a felon out of Ohio, faces grand theft and shoplifting charges, according to the Collier County Sheriff's Office.