Mark your calendar: The Delta Aquarids meteor shower will peak this week, most notably on Thursday, July 28 and Friday, July 29. Check the ValleyWx forecast discussion page to see if Mother Nature will cooperate this year. 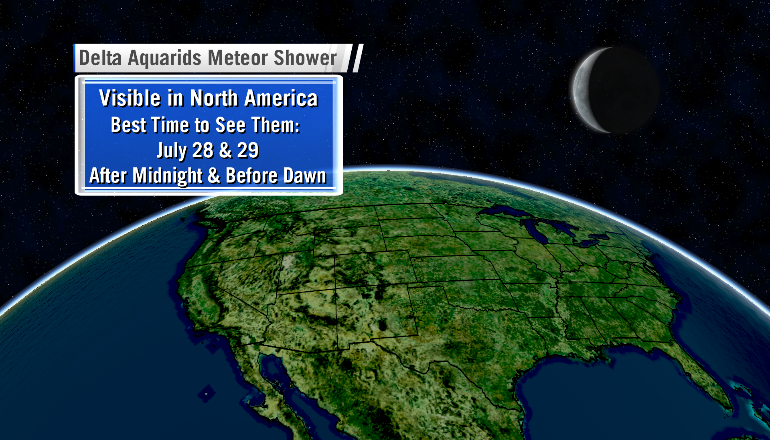 What are the Delta Aquarids?

The Delta Aquarids (Southern Delta Aquarids) are a meteor shower that occurs each year from mid-July to mid-August. The shower results when Earth passes through the debris fields left by two sungrazing comets, Marsden and Kracht, that broke apart in space. The meteor shower gets its name because the radiant appears to originate near Delta Aquarii, one of the brightest stars in the constellation Aquarius.

This year, a waning moon will be approaching its third quarter phase, which means the sky will be a little darker at night, allowing for increased ease viewing the meteors. Bruce McClure and Deborah Byrd at EarthSky.org state that the Delta Aquarids meteor shower is expected to produce about 10 to 20 meteors per hour.

When can I see the meteors?

Although the meteor shower has technically been going on since early July, the peak of the shower (or best time to see them) will take place Thursday and Friday nights.

As for viewing times, try to stay up late or wake up very, very early — 2 a.m. CDT would be optimal per EarthSky.org, though the window between midnight and dawn is fine.

Where is the best place to see the Delta Aquarids meteor shower?

The Tennessee Valley is in luck: The meteors are best seen in the southern latitudes of the Northern Hemisphere, which is where northern Alabama and southern Tennessee are located.

However, if you are located near a city, you may have difficulty spotting the meteors through the light pollution generated by buildings and street lights. If possible, try to find a wide, open field away from any artificial lights, and look up! If watching indoors is more your speed, Slooh will host a Delta Aquarids live stream on their website (click the link to be redirected to Slooh’s streaming site).

Did you see a Delta Aquarid meteor? Share your photos with us!

You can share your Delta Aquarid meteor shower pictures with WHNT News 19 in numerous ways:

We look forward to seeing your meteor shower pictures, and in the mean time, happy sky watching!