DEKALB COUNTY, Ala. – The DeKalb County Sheriff’s Office released its yearly statistics for 2019 on Sunday afternoon. 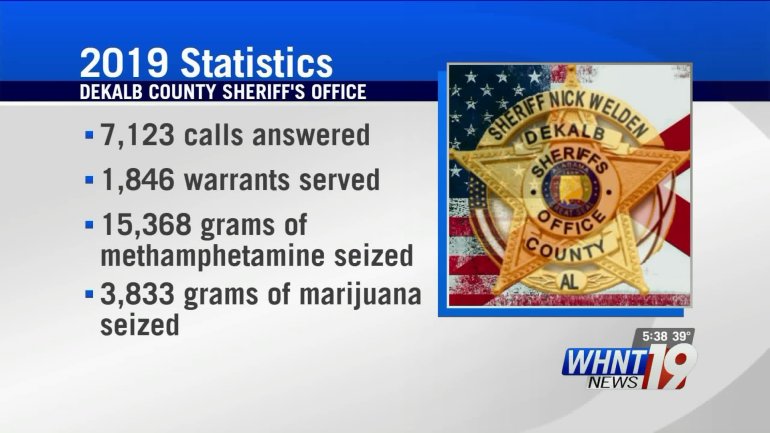 The sheriff’s office said the numbers reflect the miles driven on the roads, amount of various narcotics seized, warrants served, calls answered, and other important data.

The news release said compiling the data helps the sheriff’s office make adjustments to better serve the people of Dekalb County in 2020 and improve overall efficiency. The sheriff’s office said they release the data to the public in order to maintain transparency.

“I’m extremely proud of the hard work our deputies, investigators, narcotics agents, and interdiction agents have put in. We hope to only improve these numbers in 2020. We’re very proud to get such a large amount of Methamphetamine off our streets. Meth has plagued our county for over a decade now. The drug trade is fueled by stolen goods. Tackling it head-on will directly help make our county a better and safer place to live.”

The following are the statistics for 2019:

HOOVER, Ala. (WIAT) — The city of Hoover is mourning the loss of 41-year-old Shemethia Tynise Coteat, who was found lying in the parking lot of an apartment complex.

The family told CBS 42 that they are not ready to speak on camera.

(CNN) -- Pier 1, the troubled home furnishings retailer that has closed hundreds of stores in recent years, filed for bankruptcy Monday.

The company, based in Fort Worth, Texas, released a statement saying that it reached a plan with lenders to provide it with $256 million. It will try to find a buyer for the company.

(CNN) -- Delta Air Lines CEO Ed Bastian added a bit of fuel to the great seat recline debate that has fired up Twitter.

Appearing on CNBC's "Squawk Box" Friday morning to announce Delta's plans to go carbon neutral, Bastian was pressed to comment on "recline gate," a viral story about an American Airlines passenger who reclined her seat to have the man sitting behind her punch her seatback in retaliation.