DECATUR, Ala. — A preliminary environmental investigation found high levels of manufacturing chemicals on a property that was home to generations of Decatur city middle school students.

The study was the result of the City of Decatur asking 3M to investigate the Brookhaven Middle School property and two other landfills back in July.  3M hired GHD Services to complete the environmental investigation. The property investigated is also where the Aquadome recreation center is located.

State records indicate the report was submitted to the Alabama Department of Environmental Management last week.

The preliminary investigation report said investigators found perfluorinated chemicals PFOA, PFOS, PFBS and PFHS on the site. PFOA and PFOS chemicals were produced by 3M to make products like Teflon and Scotchgard.  3M stopped making those two chemicals in the early 2000s. The other chemicals found on the Brookhaven property are similar replacement versions of the chemicals.

It is not clear what the study’s initial findings mean for public or environmental health. The PFOA and PFOS chemicals have been linked to a number of health problems, including cancers. The presence of the chemicals in the Tennessee River has led to a number of lawsuits, including a $35 million settlement between the West Morgan East Lawrence Water Authority and 3M. The authority sued 3M over the chemicals being detected in the system’s drinking water at levels in excess of the Environmental Protection Agency’s lifetime health advisory.

Brookhaven Middle School opened in 1971 and operated until 2018. Decatur Youth Services program for at-risk children used the facility until August of this year.

A spokesperson for 3M described the review as a screening and said an investigation will follow.

The company released this statement to WHNT News 19 on Monday.

WHNT News 19 asked 3M on Monday about short-chain PFAS chemicals that the study said were found on the Brookhaven site.

We asked, “What is 3M‘s understanding of why PFBS and PFHxA would show up on the property? The report states that the landfill closed in 1963.”

The company responded, “PFBS and PFHxA detected may be a result of byproducts of previously utilized manufacturing processes.”

Decatur City Schools Superintendent Michael Douglas declined to comment Monday on the study, citing “ongoing litigation.” Douglas would not tell WHNT News 19 what that pending litigation was or who was representing the school in the matter. The City of Decatur has not responded to WHNT News 19’s request for comment.

The ‘Tennessee Riverkeeper’s, a group suing Decatur and 3M over alleged contamination of the Tennessee River, did comment on Monday.

“Tennessee Riverkeeper’s concerns continue to increase regarding 3M’s PFAS contamination in North Alabama,” said David Whiteside, founder of the Tennessee Riverkeeper. “Preliminary scientific results from the Brookhaven landfill prove that the good people of Alabama have worsening problems regarding short-chain PFAS alternative chemicals in our soil and water.

“Tennessee Riverkeeper’s team of experts are still analyzing this extensive report. Our initial review causes us significant concern due to soil and water samples that contain both long-chain and short-chain PFAS chemicals, a known threat to human health.” 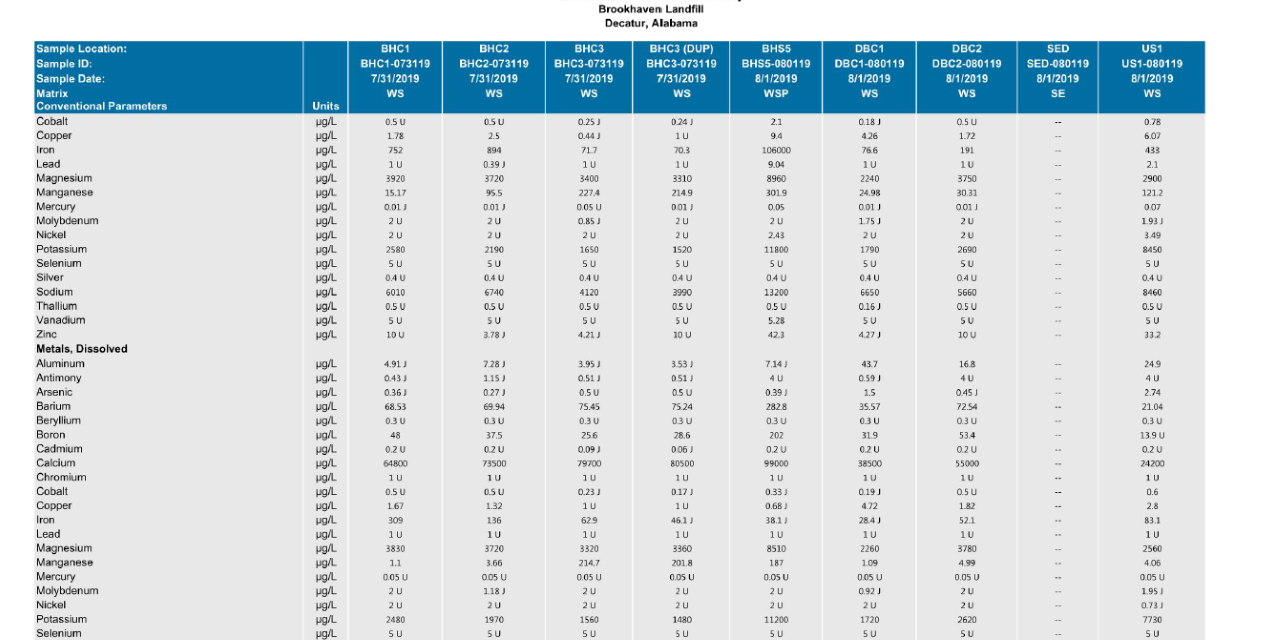 According to the report, surface water and soil sampling was conducted on July 31 and August 1 at the site. The study proposed additional soil and groundwater monitoring.

The engineering contractor said, “To evaluate groundwater conditions in the overburden ( if present) and in the competent bedrock zone, up to 7 groundwater monitoring well pairs ( 7 overburden wells/ 7 bedrock wells) will be installed.”

The group also said “Groundwater samples will be collected from each monitoring well ( 14 samples) and analyzed for the COPCs,” the report said. The general definition of COPC is “chemical of potential concern.”

The report says that the additional groundwater testing and environmental assessments could take approximately 120 days to complete and that the findings would be complete approximately 30 days after receipt of the final laboratory analytical reports.

The nearly 40-acre Brookhaven/Aquadome landfill operated from the mid-1940s until 1963. The 3M plant in Decatur opened up in 1961.

Documents obtained by WHNT News 19 show that the Environmental Protection Agency released the property from the list of possible Superfund sites in 1995. Records show inspectors with the Alabama Department of Environmental Management also went to the site several times in the 1990s. In 1996, state regulators released the city from regular groundwater testing of the property. In 2001, ADEM recommended yearly inspections be discontinued due to the condition of the former landfill and the length of the post-closure period. Site inspectors said there were no post-closure issues with the site.

1 injured in wrong-way crash on Whitesburg

Millenials the most ‘criticized’ generation in AL

Best gifts for the kitchen today under $100