MORGAN COUNTY, Ala. – Authorities said a man went around a railroad crossing and kicked a Morgan County Sheriff’s Deputy in the head Wednesday.

Deputies stated they stopped a car for going around a railroad crossing after the arms had lowered. They said the driver became belligerent and aggressive towards the deputy who stopped him, eventually exiting his car.

A second deputy responded to an earlier call for backup and witnessed a struggle between the driver, Lonnie Ray Laningham, 43, and the first deputy.

Once the driver was handcuffed, deputies stated the Laningham began hitting the hood of the patrol car, denting it several times. The first deputy returned to the vehicle to assist a passenger who had attempted to leave the vehicle. The second deputy took the driver to a police car, where he became combative again.

According to officials, Laningham rolled onto his back and kicked the deputy in the head and neck, injuring them. The deputy pepper-sprayed Laningham, who continued to spit on and kick the windows while yelling and threatening deputies.

The Sheriff’s Office said the deputy is expected to recover and has returned to duty.

Laningham was arrested and taken to the Morgan County Jail. He faces several charges including, second-degree felony assault on law enforcement, second-degree criminal mischief, resisting arrest, disorderly conduct, failure to signal, and failure to stop at a railroad crossing. His bond was set at $4,000. 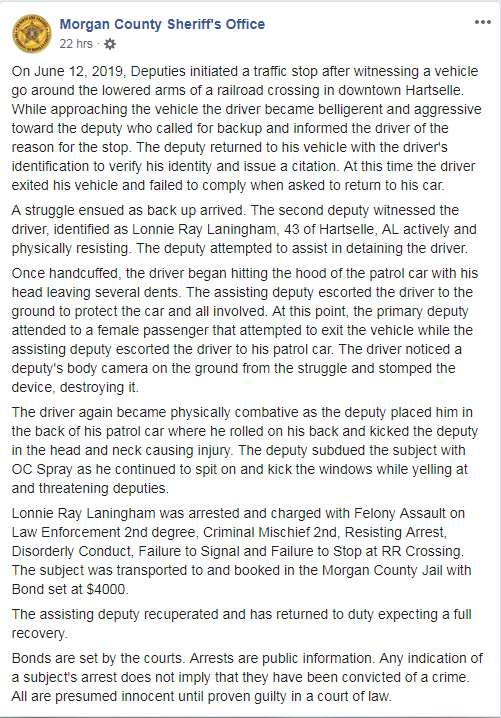 UPDATE: Morgan County Deputies were called to a domestic situation which lead to a standoff Thursday.

The scene was cleared around 9:30 AM. Deputies say the standoff ended peacefully.

DECATUR, Ala. — When an escaped inmate threatened to jump off of the roof of Decatur General Hospital, Decatur Police Officer Darius Carr didn't hesitate to take action.

Carr, who had tracked the inmate onto the roof after he had escaped from state custody, ran to the man as he jumped and grabbed his arm, holding on to him until fellow Officer Walter Segars could get to him and help pull the man to safety.

DECATUR, Ala. - The pandemic has taken a toll on all of us, and after nearly a year, we've all found different ways to cope with the hardships that accompany the virus. Church of the Good Shepard in Decatur is offering their labyrinth to those needing to clear their minds.

Church of the Good Shepard Rector Bude Vandyke takes a walk along his church's labyrinth anytime he has a heavy thought he needs to rationalize.

Walmart announces 4th round of cash bonuses for employees

What did you listen to most this year? Spotify and Apple Music providing personalized 2020 review