DECATUR, Ala. - City, county, and state leaders lined up alongside aerospace professionals to break ground on a new facility right next door to United Launch Alliance (ULA) and RUAG.

"The complex we envision here initially start with 3 structures, there will be a test stand, a test control center and an integration facility," explained Robert Wright, the deputy division manager of space for Dynetics.

The aerospace structures complex will support NASA's Space Launch System (SLS) program and commercial clients, and is set to open by late 2018.

The new state-of-the-art complex will initially be comprised of three buildings with high- and low-bay capacity and is designed to allow for the assembly, integration and structural test of very large space structures. For Dynetics, the complex is a key indication of the continued growth of the Space Systems division and its commitment to North Alabama.

"I had been saddened by America's loss of human space launch capability and NASA astronauts being reduced to having thumb a ride with the Russians to get to the space station," said Congressman Brooks. "But today, I am heartened to know the Tennessee Valley is once again playing a major role to launch American astronauts to space on American-made rockets."

When its doors open, the complex will bring about 25 immediate jobs, with further expansion possible.

King went on to say that since he worked at Marshall Space Flight Center years ago, he always advocated for more opportunities across the Tennessee Valley. Congressman Brooks and Mayor Bowling heavily pushed the talent north Alabama has.

"We have over 14,000 residents that travel daily east of here to go to work, it's time we’re able to help those residents stay here in Decatur and work," said Bowling. 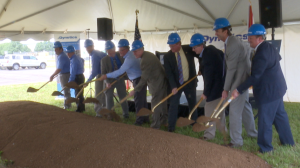 The mayor went on to say it's a sign of the growing aerospace footprint in the River City, between Tuesday's announcement, the arrival of RUAG, the recent announcement of ULA, alongside Dynetics and Wolverine Tube planning to invest millions more into the area.

"You can tells Decatur continues, though the assistance of our economic development association, to build our relationship with NASA and Marshall and we’re just thankful for that."

The increased aerospace industry west of the Tennessee Valley also plays into the excitement of Dynetics officials.

"ULA’s been here quite a while and done incredible work for our nation," began King. "RUAG just joined them a while back, they're a partner of ours on the universal stage adapter and we’re terribly excited about that."

Mayor Bowling tells WHNT News 19 the city will host an event to meet with approximately 160 contractors with NASA and Marshall, hoping to lure more opportunity to the area.

MORGAN COUNTY, Ala - Decatur Police are investigating a triple homicide that occurred in Danville Sunday night.

DECATUR, Ala. - The Morgan County Sheriff's Office has released information on someone who may be helping the man wanted for a triple murder in Danville. In addition to reporting a BOLO (be on the lookout) for Carson Ray Peters, investigators are also looking for April Hanner.

Peters is the named suspect in the shooting deaths of James Edward Miller, 55, Teresa Lynn Peters, 54, and Tammy Renee Smith, 50. Investigators say there are three capital murder warrants active for Peters. Now, the Morgan County Sheriff's Offices says Peters might be will Hanner in a black 2013 Chevrolet 1500 pickup. The truck has an Alabama license place 52GL447.

UPDATE: Decatur Police have named the suspect in this case as Carson Ray Peters.

MORGAN COUNTY, Ala. - Three people were killed and another was injured in a shooting in Danville Sunday, according to police.