Skip to content
This is an archived article and the information in the article may be outdated. Please look at the time stamp on the story to see when it was last updated.
DECATUR, Ala. – The city of Decatur said Monday that officials were working to make sure the city is complying with federal immigration procedures, after Mayor Tab Bowling said he would ask the police chief to take back a policy that Bowling said would make Decatur a sanctuary city. Bowling posted on Facebook Sunday night saying he recently learned of a policy that was distributed to the Decatur Police Department by Chief Nate Allen. The post was removed by midday Monday. 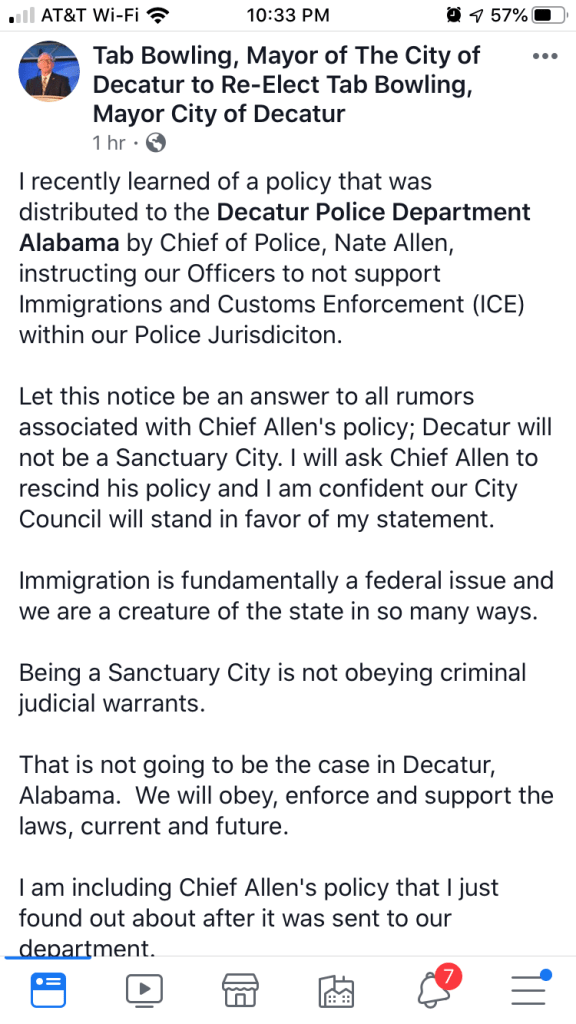 At Monday afternoon’s city council meeting, city councilman Charles Kirby read a statement disagreeing with the mayor’s criticism saying, “We’re not now or to my knowledge, ever were a sanctuary city. We’re a city that tolerates diversity.” In his Sunday night Facebook post, Mayor Bowling said the chief’s policy instructed officers to not support Immigration and Customs Enforcement in Decatur. His post said, “Let this notice be an answer to all rumors associated with Chief Allen’s policy; Decatur will not be a Sanctuary City. I will ask Chief Allen to rescind his policy and I am confident our City Council will stand in favor of my statement.” Bowling continued, “Being a Sanctuary City is not obeying criminal judicial warrants. That is not going to be the case in Decatur, Alabama. We will obey, enforce and support the laws, current, and future.” At least two neighbors showed up to Monday’s city council meeting to urge the mayor to apologize to police chief Allen. “We’re not federal agents here. We don’t have ICE located in our city. And if they’d like us to handle that kind of immigration check, then they need to send agents here,” Decatur resident Elisa McDaniel said. Bowling attached a copy of the policy to the Facebook post. The policy is titled Immigration Procedures. It says “It is the policy of the Decatur Police department to comply with local, state, or federal laws while protecting the rights of all citizens living or visiting our community.” The policy references the Section 287-G agreement — immigration and nationality act. WHNT News 19 read through the policy and it says “This section of the law authorizes the director of ice to enter into agreements with state and local law enforcement agencies, that permit designated officers to perform limited immigration law enforcement functions. Agreements under section 287(g) require the local law enforcement officers to receive appropriate training and to function under the supervision of ICE officers.” The policy then goes on to outline procedures for Decatur police officers when it comes to immigration. Point one of the policy highlights that Section 287-G are *voluntary* agreements that require local consent. In point two, it says that officers will not undertake immigration-related investigations unless the individual committed crimes directly to public safety. Point three says assisting ICE in enforcing civil immigration laws is not permitted without permission from the chief of police. Point four says that an individual can not be detained solely for a suspected violation of immigration law. Point five says DPD will cooperate with ICE if the person is suspected of terrorism or espionage, criminal activities, or is classified as a previously deported felon. Points six through nine go on to detail when and how Decatur police should assist ICE. Point 10 says officers should treat individuals fairly regardless of immigration status. Point 11 says officers shouldn’t ask immigration status during police operations. And point 12 says officers can ask for ID to enforce traffic or criminal investigations. Decatur police released a statement Monday morning stating that the department’s policies and procedures are written and reviewed under the Commission on Accreditation for Law Enforcement Agencies’ guidelines and best practices. “We’re in the business of saving lives, helping the hurt, and comforting the scared,” Decatur Police Chief Nate Allen said in the statement. “We’ll leave the governing decisions to those best versed to make them.” Later Monday, a statement from the city said Bowling’s office, the city legal department, and the Decatur Police Department were working “to clarify the policy to correct some misunderstandings or vagueness” and to ensure the city was compliant with state and federal requirements. Facebook comments to Bowling’s post were varied. Some applauded Mayor Bowling, with many people writing “thank you.” Others were wondering what policy the mayor read that led to him saying DPD doesn’t support ICE. Some of those commenters said they interpreted the policy as Decatur Police saying they won’t interfere with ICE’s work. Other comments wondered why the mayor would address the chief of police over Facebook. Bowling ended his post saying, “A decision of this nature should always come to the office of the mayor before implementing. It is definitely a reflection on my performance and decision making to which I was not involved.” Mayor Bowling told WHNT News 19 the city plans to make some changes to the policy and share it.

DECATUR, Ala - Earlier this week WHNT NEWS 19 reported that the Decatur Housing Authority is required to pay $200,000 in damages as part of a settlement with the US Department of Housing and Urban Development.

This is the result of a 2019 Compliance review conducted by HUD, that says the Decatur Housing Authority maintained discriminatory practices at three of it's senior living facilities.

DECATUR, Ala. – A man wanted for a weekend murder turned himself in Wednesday, Decatur police said.

LIMESTONE COUNTY, Ala. – The Alabama Department of Corrections said Wednesday that staff members at two of its North Alabama facilities had self-reported positive COVID-19 tests.

A staff member at Limestone Correctional Facility and one at North Alabama Community Based Facility in Decatur reported and self-quarantined after their results, according to ADOC. The department said it's investigating to determine what inmates or other employees may have been exposed to those staff members.