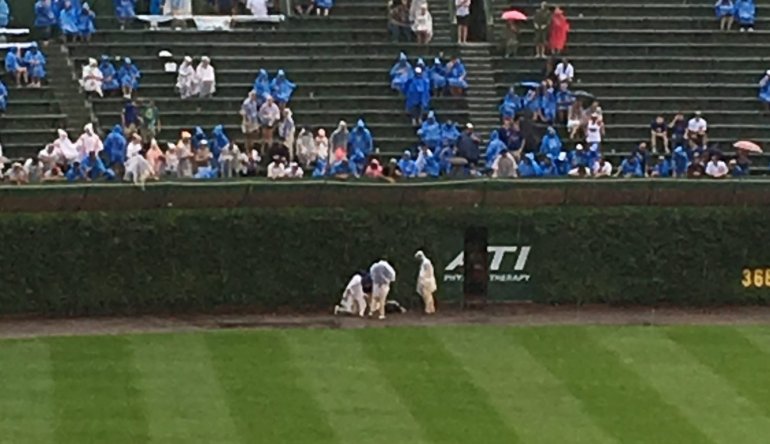 CHICAGO — A fan in the stands at Thursday’s Cubs game at Wrigley Field reportedly fell from the bleachers down to the field, where he lay motionless for several minutes.

Reports from inside Wrigley indicate the fan was in the right field bleachers. Photos have surfaced on social media of the unidentified fan lying facedown on the warning track. Some witnesses reported seeing him move slightly before he was taken off the field.

The game had not started at the time of the fall, WGN reports, as it was still in a rain delay.

He was eventually carted off the warning track, but the extent of his injuries is not yet clear.

Horrifying sight at Wrigley Field. A fan just fell on the field from the right field wall. Laying on the warning track. Hasn't moved. #Cubs

The Chicago Cubs have not yet responded to requests for comment.

Scary scene in the outfield at Wrigley. Fan face down in the warning track. Not moving pic.twitter.com/F6WWk95pEx

Fan fell from the bleachers at Wrigley and seemed to be unconscious and was taken off on a stretcher….hope they are okay.

Cubs personnel are attending to the fan. Appears to be slightly moving. pic.twitter.com/XJj8ZuU8g2

NASHVILLE, Tenn. (WKRN) — A 28-year-old man accused of sexually abusing a 13-year-old girl he met at a Nashville Walmart has been charged with rape.

A warrant states Metro police were notified Monday that a 13-year-old girl, who had been reported missing, was located at an apartment belonging to Orlin Funez-Flores.

HUNTSVILLE, Ala. — There will be no Christmas floats or marching bands in downtown Huntsville this year.

Because of the pandemic, this year's Christmas celebration in the city will be high in the sky.