MADISON COUNTY, Ala. - Construction to the bridge on Buddy Williamson Road between Mint Springs Road and Old Limestone Road in New Market is complete. 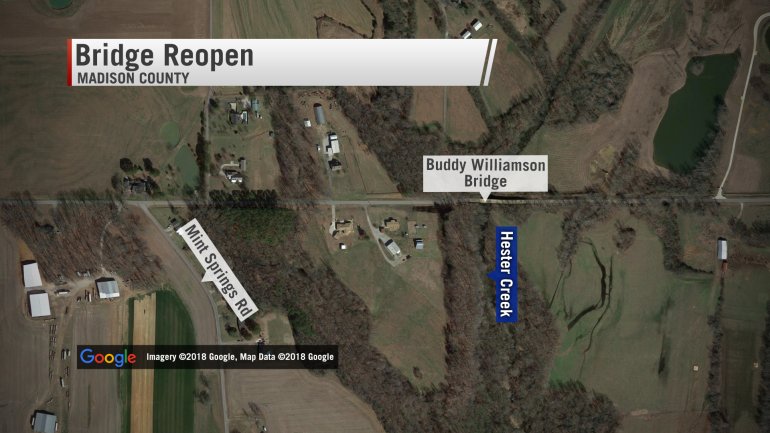 "Thank goodness it's finished. The road is open and it's safe to cross," said Jones.

Since the closure on December 26, motorists have had to find alternate routes.

"That is a major road. I don't know the traffic count but there are a lot of cars that travel this road to and from work. Traffic is back to normal. It was aggravating to a lot of people who would have to detour and detour through New Market and that made for several miles of extra travel," says Jones.

Jones says the support of the bridge had deteriorated making it unsafe for heavy vehicles to travel, and the repair ended up costing about $9,000 more than expected.

"They had to leave some of the supports under the bridge because there was more deterioration than they first thought. They decided to leave the temporary supports which became permanent supports. The increase in cost was for the material that went in those supports they had to leave," explains Jones.

Jones says he wants to continue working to improve roads and bridges in his district.

GRACEVILLE, Fla. (WDHN) – A Florida woman died Monday after an airborne deer that had been struck by a truck smashed through the vehicle in which she was riding.

Edna Morgan Griffin, 81, of Chipley, Florida, died from injuries she sustained in the accident, which happened around 6:30 a.m. on a state highway.  The driver of the car, Katherine Mills Comerford, 58, of Sneeds, Florida, sustained serious injuries and was taken to a hospital in Dothan, Alabama, for treatment.

GAINESVILLE, Fla. — Gainesville police are investigating jars of preserved human remains found in the crawlspace of a house previously owned by a University of Florida professor.

The remains were discovered during an inspection of the house’s foundation, according to WCJB.

HUNTSVILLE, Ala. - The eclectic, modern tiki-bar/eatery we've all been waiting for is now hiring.

Phat Sammy's located in downtown Huntsville is looking for motivated, passionate, and quirky individuals to join the Phat 'Pham'.