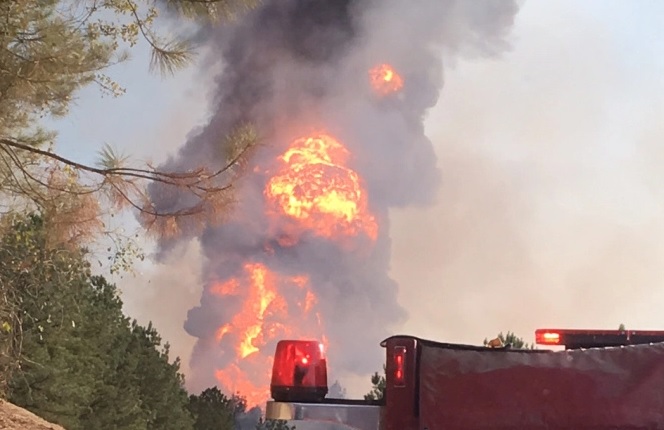 SHELBY COUNTY, Ala. –  According to an update from Colonial Pipeline, one person was killed and another five people were taken to Birmingham area hospitals following an explosion on the gasoline pipeline in Helena Monday afternoon.

Monday afternoon officials on the scene said 8-9 Colonial Pipeline subcontractors were working on the gas pipeline trying to flush out one of the lines when it exploded.   Colonial has shut down both pipelines running through the area.

“The fire will not be out any time soon,” Burchfield added.

According to WIAT, several cleanup units are on the scene. Birmingham fire is providing foam.  A UAB Hospital spokesman confirmed three patients were flown to UAB in the afternoon, three more were coming by ambulance and one more was coming by air, according to our news partner AL.com.

Gov. Robert Bentley said the explosion happened about a mile west of the spot where the pipeline burst last month. That rupture led to gasoline shortages across the South.

My Office is closely monitoring the explosion in Helena, receiving updates from State & local officials. Pray for workers, rescue personnel.

UPDATE:The explosion is Colonial Pipeline & occurred approx one mile west of the previous incident. ADEM & AEMA are on the scene now.

The Alabama Forestry Commission tells WHNT News 19 that two wildfires caused by the explosion have contained at a total of 31 acres.

In addition to the injured victims, Shelby County Sheriff John Samaniego said there’s a possibility that two workers are still missing. The heat from the blaze, he said, is hindering the search for them. Flames are still reaching about 50 feet in the air.

Colonial Pipeline says in a statement that it has shut down its main pipeline in Alabama after an explosion in a rural part of the state outside Birmingham.  The Georgia-based company said in the brief statement Monday evening that its top priorities are the health and safety of its work crews at the scene and protecting the public. The company’s statement did not address how Monday’s explosion might affect the availability of gasoline and said more information would be released as it becomes available.

The Alabama Forestry Commission reports there are a total of three wildfires as a result of the explosion. Officials say no structures are directly threatened at this time. The Forestry Commission has three bulldozers and eight firefighters on the scene.

DEKALB COUNTY, Ala. — A Valley Head man is facing an assault charge after a Friday shooting, authorities said.

John Christopher Shea Hunter, 38, was arrested Friday after the DeKalb County Sheriff's Office said he was involved in a shooting at a home on County Road 233 between Sylvania and Rainsville. Hunter left the home with a woman before deputies and Sylvania police could arrive, authorities said.

MONTEVALLO, Ala. (WRBL)– The United States and Canada have different protocols when it comes to COVID-19. Connor Logan is a freshman at the University of Montevallo from Toronto, Canada. He is a member of the UM golf team majoring in Finance.

The day he flew into the U.S. he had already begun to see a difference with the COVID-19 protocols.

WASHINGTON (Nexstar) — The White House says Border Patrol is processing hundreds of asylum seekers daily who have been waiting in Mexico for the past few years while their case processes in U.S. Immigration Court.

‘I hope I make it’: 7-year-old Alabama girl selling lemonade to fund her own brain surgeries