DEKALB COUNTY, Ala. – A Boaz man is facing charges for stealing handguns from a vehicle near Etowah County.

Christian Chase Barnett, 20, was arrested Wednesday, a day after deputies said someone stole the handguns from a vehicle on County Road 17.

DeKalb County Sheriff’s Office deputies responded to a domestic violence call on County Road 4 Wednesday, where a victim reported he had been assaulted and had his prescription medication stolen. 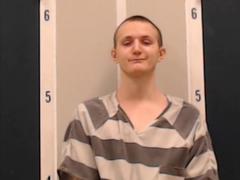 Deputies developed Barnett as a suspect in the domestic violence case and said thye also were told he had handguns that may have been stolen. The guns were found in a backpack under the house, deputies said.

Barnett was charged with two counts of second-degree theft, breaking and entering a vehicle and third-degree domestic violence. He was booked into the DeKalb County Jail on more than $10,000 bond.

CAPE CANAVERAL, Fla. — Two NASA astronauts are on their way to space as part of a history-making ride into orbit aboard a rocket ship designed and built by Elon Musk's SpaceX company.

Their destination: the International Space Station, 250 miles above Earth.