ATHENS, Ala. — Athens firefighters rescued a 12-year-old girl Sunday morning after she fell into a creek, according to their post on Facebook. 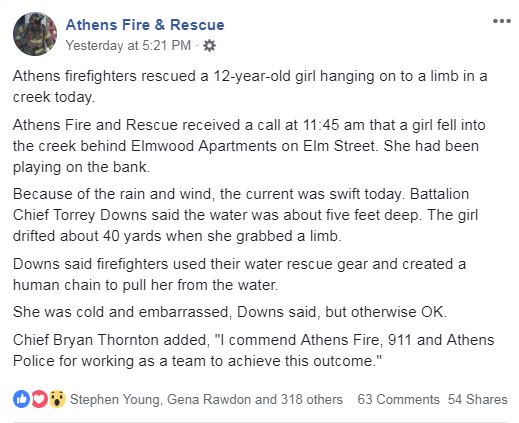 Athens Fire and Rescue responded to the creek behind Elmwood Apartments on Elm Street around 11:45 a.m. The girl had been playing on the bank before she fell into the creek. Firefighters said she had drifted about 40 yards when she grabbed a limb.

Now first responders are sending out a warning.

“We come down here wither out kids all the time and play,” Elmwood Apartment resident, Haley Wilborn said.

But Sunday was different. Wilborn and her husband heard sirens and rushed to the water and he sprang into action.

“We saw her hanging onto the limb down there and so he just took his boots off and jumped in,” she said.

The girl was swept 40 yards downstream before she grabbed the limb. Three agencies came to the scene – including the Athens Fire dDepartment.

“Water is one of the most powerful forces in the world,” said Bryan Thornton, Athens Fire Chief.

And water rescues can be very dangerous. The rescue crew had to jump in the water to get the girl – eventually even creating a human chain.

“And the actually got a harness on the little girl just to get her secured and then with that done we do like a sweep to the bank,” Thornton said.

He credits teamwork and new equipment for the success of the water rescue.

“We did get the equipment that we have now because of a drowning years ago,” he said.

He hopes the fire department doesn’t have to use that equipment again anytime soon.

“Just a little bit of water can move a car…Swift water it will take you and wash you downstream before you know what’s going on,” he said.

That’s why he warning people to be careful near the water after a storm. The water at the creek behind the Elmwood Apartments is a place where many children play. Neighbors say it is a fun place to take kids fishing and it’s normally safe. But after the storm on Saturday night, the water levels were extremely high and the current was moving much faster than normal.

Thankfully everyone was ok. The 12-year-old girl was fine and none of the first responders were injured during this rescue.

LIMESTONE COUNTY, Ala. - The Limestone County Sheriff's Office has arrested three people after they ran from police.

Two of the arrests initially stemmed from warrants following a Tuesday assault and attempted robbery on Wallace Lane.

ATHENS, Ala. - Downtown Athens is overhauling an old alleyway, making it into a place to eat and enjoy art. Athens leaders hope Merchant's Alley will help businesses bounce back as more people return to the downtown area.

Could Alabama be the latest state to restore voting rights to former inmates?

HUNTSVILLE, Ala. - Almost a hundred members of Faith in Action Alabama signed a letter urging Alabama Speaker of The House Rep. Mac McCutcheon to support a bill that would give former convicts the right to vote again.

Many states have already approved similar bills, and SB118 would restore voting rights to thousands of former prisoners without including their remaining court fees and criminal fines as a prerequisite.

“A pillar and stalwart.” North Carolina resident and oldest living American dies at 116

What to Consider When Hiring a Home Inspector

First supermoon of 2021: See the Pink Moon light up the night sky this month

Braves call up Kazmar, who last played in 2008 in majors