ATHENS, Ala – A sewage spill in a Limestone County creek kills hundreds of fish – including a protected species. Now the city of Athens is on the hook for $30,000 in penalties.

In May, biologists with the Alabama Department of Environmental Management say at least 3,000 fish in Athens’ Swan Creek and tributaries suddenly died, including 10 of the protected slackwater darter.

“It was simply a worker error we had. We were flushing the line and failed to pull the bag out at the end of the day and created the sewer overspill. A very serious issue that we take very seriously,” Marks said.

Marks says the city’s not only dealt with the worker who caused the sewage spill into Swan Creek but also put checks and balances in place to ensure it doesn’t happen again.

The city has 30 days to pay $16,000 of that penalty – which covers the value of the fish, the investigation and losses associated with the kill. The values of the fish vary. The 10 slackwater darter are valued at more than $13,000. 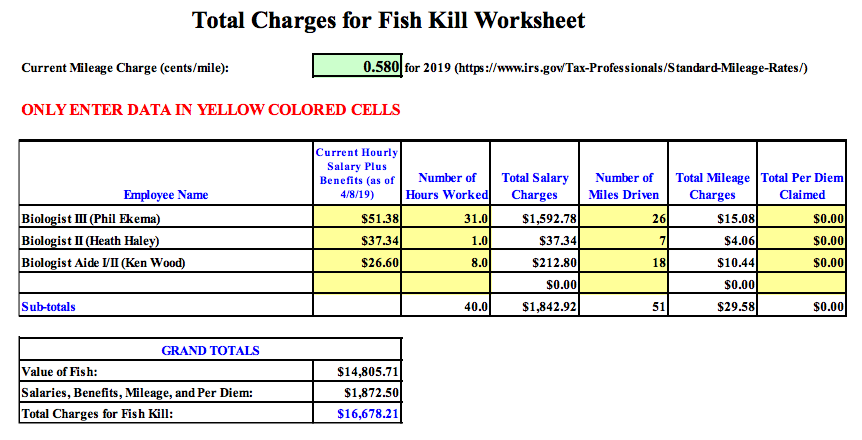 It also says the city did not notify the public of a sanitary sewer overflow in 2017 because it was not a public health threat. The paperwork also says the city submitted an SSO report saying the health department was not notified until more than a month after overspill in December 2017.

According to ADEM, a city must notify, “the Director, public and county health department and any other affected entity, such as public water systems, as soon as possible upon becoming aware of any notifiable SSO.”

Mayor Marks has disputed that they did not provide proper notification of the SSO.

“The things that we did contest in the conversation with the ADEM consultant was the fact that there was a paragraph that said the City of Athens has not fully reported. We did report, we put signs up, we posted the entire event, but we did not send in all the reports to support all the details of it and that has been corrected internally,” Marks explained.

The consent order from ADEM also says the agency has not received annual toxicity reports from the city from 2017 or 2018.

“I have a background degree in chemistry and biology. This hits home with me in that environmental management is one of the things that we pride ourselves in,” he said.

He says the incident in May was the first time a sewage overflow resulted in a fish kill.

“If they are, they’re overflow from groundwater. There’s occasionally so much rain that there’s an overflow, but not anything that is an environmental issue that has created a great deal of exposure to fish kill or anything like that,” he said.

The mayor says Athens has already agreed to pay the penalty and that $30,000  will come out of the wastewater department’s budget.

The city has 45 days from the time the consent order was filed to pay the entire penalty.

The Labor Department's report Thursday underscored that President Joe Biden has inherited an economy that faltered this winter as virus cases spiked, cold weather restricted dining and federal rescue aid expired. The government said that 5.1 million Americans are continuing to receive state jobless benefits, down from 5.2 million in the previous week. That signals that fewer people who are out of work are finding jobs.

HUNTSVILLE, Ala. - Huntsville Fire and Rescue responded to a Ridgecrest Elementary School Thursday morning right before school started. They responded to the smell of smoke in the building.

Everyone inside the building was evacuated temporarily. Craig Williams with Huntsville City Schools says the fire department investigated and determined there was no fire. At that time, students and staff members were allowed to return to the building.

Fauci, speaking by videoconference from pre-dawn United States to WHO’s executive board, said the U.S. will join the U.N. health agency’s efforts to bring vaccines, therapeutics and diagnostics to people in need, whether in rich or poor countries. He said the U.S. will also resume full funding and staffing support for WHO.

Can COVID-19 vaccines be mixed and matched?

DHS: Biden administration will pause some US deportations for 100 days

Psaki vows to bring ‘transparency and truth’ to press briefings

‘Come with me if you want to live’: Schwarzenegger gets COVID vaccine, urges others to follow suit

Gov. Ivey to give COVID-19 update on Thursday