MONTGOMERY, Ala. (AP) — A new statue of civil rights pioneer Rosa Parks was dedicated in Alabama’s capital city on Sunday, the 64th anniversary of her historic refusal to give up her seat on a public bus to a white man.

Montgomery Mayor Steven Reed and Alabama Gov. Kay Ivey pulled back a cloth to unveil the statue before a crowd of about 400 spectators.

The ceremony coincided with the anniversary of Parks’ Dec. 1, 1955 arrest that sparked the Montgomery Bus Boycott, a pivotal part of the civil rights movement. 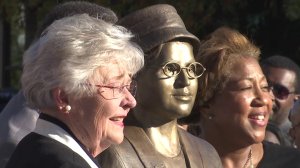 “This depiction will inspire future generations to make the pilgrimage to our city, to push toward the path of righteousness, strength, courage, and equality,” Reed, who recently became the first African American mayor of Montgomery, said at the ceremony, according to al.com.

Four granite markers near the statue honor plaintiffs in Browder v. Gayle, the court case that determined segregation on Montgomery buses was unconstitutional. One of the plaintiffs, Mary Louise Smith, took part in the ceremony on Sunday.

Fred Gray, the attorney who defended Parks, the Browder v. Gayle plaintiffs and many other civil rights activists, sat in the second row at the unveiling.

“For the city officials, from the city and the county, to be able to honor Mrs. Parks and honor those plaintiffs, and even more importantly to honor the 40,000 African American men and women who stayed off of the buses for 382 days, it is indeed a step in the right direction,” Gray told the Montgomery Advertiser.

(NEXSTAR) – In households where Christmas is observed, there are three types of parents: those who have successfully avoided the Elf on the Shelf tradition, those who love it and those who are just doing their best not to forget that elf needs to move EVERY night in December.

With the pandemic raising potential health concerns around a strange magical creature coming to visit, the last two groups of parents are already beginning to take action before the elf's typical arrival. It seems both those who love the creatures and those who don't have largely landed in the same place. That elf needs to be locked up.

ROCKFORD, Mich. (WOOD) — While the elderly are more at risk of contracting COVID-19, multisystem inflammatory syndrome is a complication of the virus that can be dangerous, even deadly, for kids.

Mack Bowman, a Rockford teen, recently returned home from a five-day stay at Helen DeVos Children’s Hospital where he was treated for the syndrome. He developed the inflammatory condition roughly a month after testing positive for COVID-19.

HUNTSVILLE, Ala. - Once the Food and Drug Administration gives emergency approval, any approved vaccine will be sent to all states, territories and major metros, officials say, within 24 hours of authorization.

Operation Warp Speed leaders hope to have close to 40 million doses by the end of the year.

Sunbeam recalls 940,000 crock-pots ahead of Thanksgiving due to burn risk