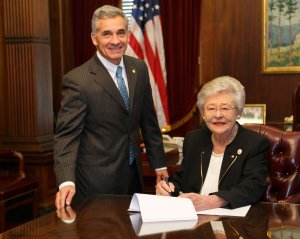 The act sponsored by state Sen. Del Marsh, a Republican, raises the income threshold from $20,000 to $23,000 for married couples filing jointly, heads of households, and single filers. For married individuals filing separately, it rises from $10,000 to $10,500.

It’s Alabama’s first tax break since 2006. A statement from the governor said it will save taxpayers $40 million over the next decade.

Ivey said the act gives low-income and middle-income Alabamians much needed relief on their taxes with the state’s economy booming.

The Alabama House and Senate both unanimously passed the bill. The act was immediately effective after being signed Thursday.

WASHINGTON — Nearly 4 million doses of the newest COVID-19 vaccine will be shipped Sunday night, and will begin to be delivered to states for injections starting on Tuesday.

White House COVID-19 coordinator Jeff Zients announced that the entire stockpile of the newly approved single-dose Johnson & Johnson vaccine will go out immediately. J&J will deliver about 16 million more doses by the end of March and 100 million total by the end of June.

The one-year anniversary of The World Health Organization declaring COVID-19 a global pandemic is approaching. Here is a quick look at what's going on around the world with coronavirus.

HUNTSVILLE, Alabama — The Alabama Department of Health is asking Alabama residents who have tested positive for COVID-19 to complete a survey. The goal of the survey is to help ADPH learn about the spread of coronavirus and to help with contract tracing efforts. The survey can be accessed here.

(BBB) - To help slow the spread of COVID-19, State Departments of Motor Vehicles (DMVs) around the United States, and the Registry of Motor Vehicles in Canada, have expanded their online offerings, allowing drivers to book appointments or pre-pay for services.

Unfortunately, scammers are using this opportunity to trick drivers with lookalike websites that steal money and personal information, according to new reports filed by consumers on BBB.org/ScamTracker.

‘I hope I make it’: 7-year-old Alabama girl selling lemonade to fund her own brain surgeries