MONTGOMERY, Ala.  — As we grow closer to the election, the Attorney General's race is again heating up over campaign finance allegations involving Attorney General Steve Marshall. Democrat Joseph Siegelman is citing the issue in a new campaign ad, while Marshall insists he`s followed the law.

Marshall has received $735,000 in campaign contributions from a PAC run by the Republican Attorney`s General Association, also known as RAGA.

The problem, according to his opponents, is that the RAGA PAC takes money from other PACs, which violates Alabama law. Marshall's attorney has argued state law doesn't apply to a federal PAC but last week, two Montgomery attorneys said an investigation is needed.

Jullian McPhillips, who has spoken as a campaign surrogate for Marshall's opponent, Joe Siegelman, and conservative attorney Melissa Isaak contend Marshall violated campaign finance law by accepting "illegal" donations since the group connected to the Republican Attorneys General Association had accepted money from other PACs.

Alabama law bans transfers between political action committees and says candidates must return contributions they know to be illegal.

Marshall`s opponent Joseph Siegelman has taken to the airwaves with a new campaign commercial, arguing in a graphic that Marshall was "Handpicked by Gov. Bentley, appointed without a vote, and under investigation for illegal contributions." 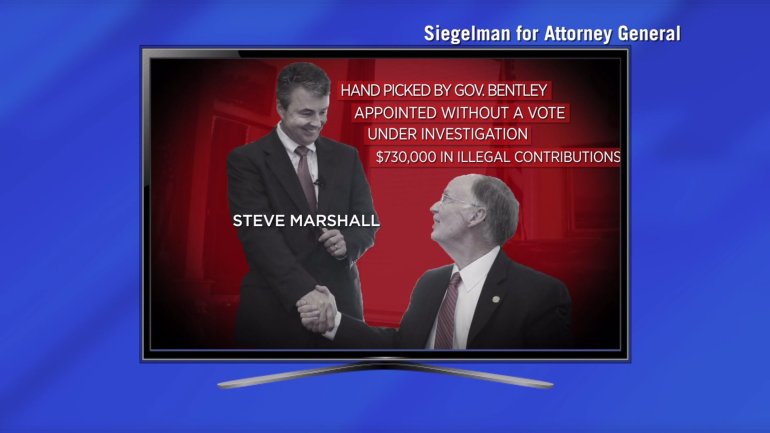 "Unfortunately, this is just another political stunt," Marshall's campaign said in a statement after the initial news conference on Thursday. The campaign said Alabamians are tired of "liberal activist lawyers who abuse the court system with false and frivolous accusations."

McPhillips and Isaak contend in the letter to Montgomery County District Attorney Daryl Bailey that Marshall erred by accepting money that had shuffled between PACs. The letter asked Bailey to take all appropriate action, including having a grand jury decide "whether Mr. Marshall should be formally charged with a violation."

This summer, a judge dismissed a lawsuit filed by Marshall's primary opponent over the money.

Marshall's attorney argued that there was no violation because the Washington, D.C. - based RAGA group is federally regulated and didn't fall under the Alabama law. Even if it did, he said, there was no wrongdoing by Marshall because the law allows PACs to give to candidates.

Marshall says it`s desperation on his opponent's part. "This is simply a way for him to somehow or another raise the distraction in the final days of an election, from what needs to be the issues.

But last week, the Montgomery District Attorney was asked to get involved, and a familiar warning was issued. McPhillips says he thinks "it`s going to lead to him either being impeached or convicted."

For its part, RAGA says it follows the law.

In addition to the issues of legality he raised, Siegelman has said the use of the PAC makes it difficult to know who is funding Marshall's campaign.

So far, Marshall has raised $3.1 million in the race for attorney general, Siegelman has raised $560,000

Associated Press contributed to this article.