HUNTSVILLE, Ala. – People across Alabama are rebuilding or repairing their homes after they were destroyed in tornadoes or flood waters. As unbelievable as it might seem, there are people who specialize in taking advantage of these situations.

Friday, Attorney General Steve Marshall traveled to Lee County to provide a warning to tornado survivors. He wants to ensure they aren’t put through a financial crisis by scammers posing as contractors.

Rising flood waters and deadly tornadoes have left hundreds of homes in need of repair.

“Unfortunately, there are people who will come out every single time and try to take advantage of people,” said Elizabeth Garcia, Better Business Bureau of North Alabama Executive Director.

She says to beware of ‘storm chasers’.

“There are other companies that will come often from out of state, and they’ll target areas that have been hard hit by a storm, and try to get as much business as possible, and then move on,” she explained.

She said if the work isn’t done to a homeowner’s standards, it is very difficult to contact these companies or get them to come back to correct the job. That’s why she recommends using local contractors.

Before anyone signs a contract with a company, she recommends getting at least three bids for the project. That way a homeowner can get a better understanding of the project’s cost and what the job will entail.

“And not just depend on the opinion of one particular remodeler,” she added.

She urges people to not get a homeowner’s permit for structural repairs.  This is what a homebuilders’ license looks like. 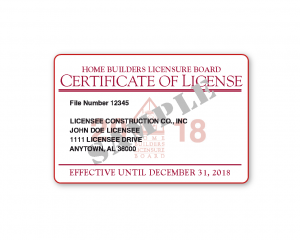 Contractors should have a license and have no problem getting a permit themselves.

“If they ask you to pull it for them, that’s a red flag,” she said.

She also encourages people to follow the ‘rule of three’. She says to only pay a third of the money for the job as a down payment, another third throughout the project, and wait to give the contractor the final payment until the job is complete.

“After you’ve had a chance to inspect all the repairs that need to be done, and if the municipality has to come in and re-inspect that area again to make sure it’s up to code, after that is all done, you can then pay the final third to the company. That way you won’t be giving all the money or nearly all the money to the company,” she said.

She says giving too much money to a company upfront can be risky.

“The company will either not get the job done or it’s done improperly and if they have all of your money, then they don’t don’t have the incentive to come back,” she explained.

Garcia recommends starting with the BBB website to find a reputable company to work.

The Alabama Homebuilders Licensure Board also offers tips for selecting a safe company to hire.

FLORENCE, Ala. — It’s now been one year since City of Florence Planning and Community Development Director Melissa Bailey announced the launch of the Florence First Grant to assist small businesses.

Bottoms was elected in 2017 after a close election against her opponent Atlanta City Councilwoman Mary Norwood. She was the city’s second Black woman executive.

EAST PROVIDENCE, R.I. (WPRI) — NASA is set to launch a rocket from their Wallops Island location just before 8 p.m. on Friday, May 7.

With a 40-minute launch window, the NASA Black Brant XII will take off on a mission to perform research about how energy and momentum are transported in space.

Stimulus checks: Over 1M more just went out. Here’s who got one