NASHVILLE, Tenn. – Monday, the Tennessee Bureau of Investigation urged the public to remain vigilant as law enforcement officers continue to look for Elizabeth Thomas and Tad Cummins.  They are the two individuals highlighted in an Amber Alert issued one week ago.

Thomas is 15 years old. Cummins, 50, is suspected of kidnapping her and is now on the TBI’s Top 10 Most Wanted List.

The TBI continues the public to be on the lookout nationwide and report any tips to 1-800-TBI-FIND. “So far, there have been no actionable tips, no credible sightings of the two,” said TBI spokesperson Josh DeVine. “That is very rare for an Amber Alert seven days in.”

DeVine said it’s believed Cummins is hiding the teen from the view of the general public. The TBI urges property owners, especially in rural areas, to search their property and report anything suspicious. People who manage campgrounds, parks, large parking lots and parking garages are also urged to check their premises.

The TBI continues to release surveillance pictures and video of the two in hopes of finding them. The clips below are the newest released by the investigative unit. They are of Cummins several days before he disappeared with Thomas.

The two are believed to be in a silver 2015 Nissan Rogue with Tennessee license plate 976-ZPT. “If you find yourself driving behind that vehicle, pick up your phone and call 911,” said DeVine. “In those situations time is of the essence and we need to get local law enforcement to your location ASAP.” 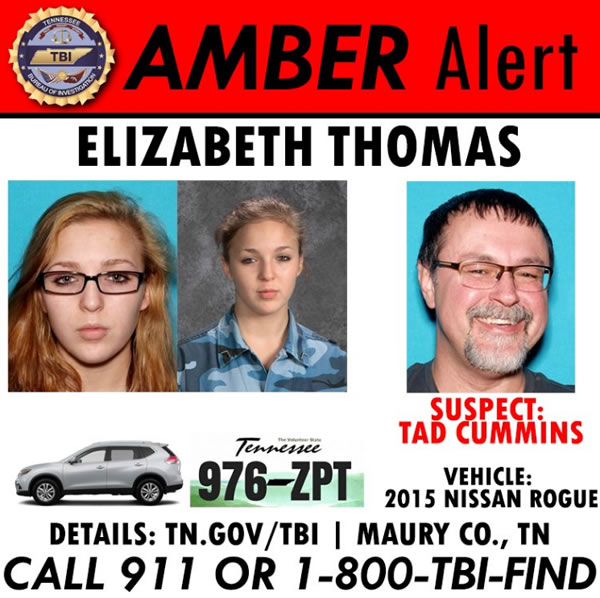 Cummins’ wife, Jill Cummins, pleaded with her husband on Friday to turn himself in and bring the teenager home.  Tad Cummins had formerly taught at the teen’s school in Maury County, Tennessee, but was fired after the alert was issued.

The Tennessee Bureau of Investigation said it remains “extremely concerned” about the well-being of Elizabeth Thomas, who was last seen Monday, March 13 in Columbia. The investigation showed the two may have stopped in Decatur, Alabama, but no further tips have developed.

NEW PICTURE: Here's the last known photograph of Elizabeth Thomas prior to her alleged kidnapping. Spot her? 1-800-TBI-FIND! #TNAMBERAlert pic.twitter.com/k1nKsJyPa0

A statewide Amber Alert from the TBI says Cummins “may have been abusing his role as a teacher to groom this vulnerable young girl for some time in an effort to lure and potentially sexually exploit her.”  The Amber Alert is active in both Tennessee and Alabama.

“We’re still coming for you. We’re going to do everything in our possibility to bring you home,” DeVine said to Elizabeth.

“You have the opportunity to do the right thing,” DeVine said to Tad Cummins. “This is not who your church community knows you to be, your family, your grandchildren know you to be. Please do the right thing and bring Elizabeth home.”

Birthday girl goes out with a bang, police say

Earliest Freezes On Record For The Tennessee Valley