HUNTSVILLE, Ala. (WHNT) - California-born West Point graduate Richard Goldsmith has called Madison County home for 6 years. But military legacy has taken him everywhere from Germany to Kansas to Texas.

"My father was in the Army and I always knew I wanted to be a soldier and that's why I wound up all over the place. But now I'm going say I'm an Alabamian and we're not planning on going any place else -- we don't have a professional football team but we have Alabama so roll tide," Goldsmith joked.

Captain Goldsmith had been in control of Company C, 2nd Battalion, 22nd Infantry in the Republic of Vietnam for less than a week when he met the combat action that would earn him a Silver Star.

While on a reconnaissance operation, elements of Company C came in contact with a regiment or more of enemy forces deep in the jungle. 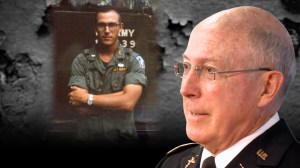 "That was a difficult day. So we had a fight on our hands and I thank the Lord for cannon field artillery and close air support because our company would have been overrun if it weren't for lots and lots of everything you can imagine. Because apparently we were the only battle in town that day so anybody that was looking for a fight piled onto ours which, we were happy for that."

Immediately, Captain Goldsmith organized his men and directed their fire on the hostile positions. As the battle progressed, Captain Goldsmith, with complete disregard for his own safety, exposed himself to the hail of fire as he lead his men in an assault of the enemy emplacements.

"All I could see was muzzle flashes from them firing it us and it lasted about 9 hours; it was a big battle."

Upon nearing the enemy bunkers, Captain Goldsmith aided in destroying one of the machine gun emplacements. His valorous actions contributed immeasurably to the success of the mission and the thwarting of the hostile force.

On November 10, Goldsmith and 5 other veterans will be inducted into the Madison County Military Heritage Commission Hall of Heroes. An emotional ceremony the Goldsmiths are approaching with much anticipation.

"Well I wasn't sure I wanted to accept the privilege because there are so many others who are far more worthy of being on a Hall of Heroes," Goldsmith said, humbly. "I think of the 58,000 who can't be honored in any way because they already paid the ultimate price. So, it's emotional for me, too."

You can watch our 'Saluting Our Heroes' Documentary featuring the 2014 Hall of Heroes inductees by clicking here.