HUNTSVILLE, Ala. – We first met Jacob Brown a few years ago, when he took on an important job with the Huntsville Havoc.

Jacob started playing hockey at the age of four and was a big Havoc fan.

So when, at just 9-years-old, he was diagnosed with Acute Lymphoblastic Leukemia, the team reached out.

As Jacob recalls, “the Havoc sent over some stuff to help me feel better.”

“Once I was out of the hospital, they named me Captain of the team. So I started going to all the home games that I could.” 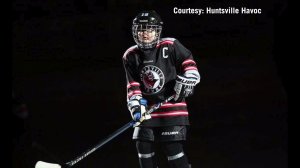 Now 12, Jacob loves the Havoc more than ever and takes his duties as captain, seriously.

He’s also feeling a lot better and up for a little traveling. He’s hoping to check out some new ice.

“I want to go to Los Angeles, so I can be on the ice with the LA Kings.”

Jacob is one of the more than 80 North Alabama kids on the Make-A-Wish waiting list.

Why the LA Kings? Well, he’s always followed the team. Dad probably has something to do with that.

Scott Brown says, “I’ve loved the Kings ever since I was probably younger than Jacob’s age. I don’t live in California anymore but I still watch them. Jacob’s a defenseman and he loves Drew Doughty.”

After more than a year on the waiting list, Jacob is hopeful his wish will be granted soon. In the meantime, he has a message for other critically ill children.

“Keep fighting. You can do it.”

‘I had to have him’: Police say man who shot five in Georgia and Alabama over weekend racially motivated

U.S. Congressman says ‘something’s going on that we can’t handle’ when asked about UFOs