HUNTSVILLE, Ala. – Megan Roberts is one of those people who shines so bright, she nearly sparkles. The only thing brighter than her personality is her smile, as she talks about her best friend.

“It’s like I get a wish every day because she’s always with me. She’s always here. So, she can encourage me with things that I’ve had to deal with,” Megan says.

Megan has dealt with a lot.

At 15, she spent nearly an entire year in the hospital. Chronic pancreatitis led to the removal of her pancreas, spleen, gallbladder, appendix, and part of her small intestine.”

It was during that time a child life specialist recommended the family look into the Make-A-Wish program.  Like many people, Megan and her mom thought the program was only for terminally ill children but they soon learned it’s for any critically ill child. Once they discovered she qualified, there was no question about Megan’s wish.

“I knew that I wanted a puppy.”

Not just any puppy, though.

Megan researched reputable breeders, as she wished and waited.

“It did give me a lot of hope during that time because I knew a puppy was going to need walks and it was going to need attention… and I hated physical therapy. It was very tough. I had gotten very weak from the hospital stay, so I was in a wheelchair. She gave me a reason to push myself to do it. I really think if I didn’t have her, I might not have pushed myself enough to get out of the chair.”

Finally, a few days after Christmas of 2013, Megan got her wish when an 8-week old English Creme Golden Retriever arrived. 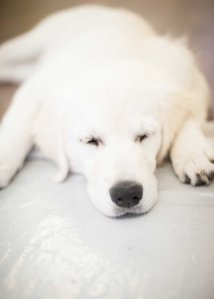 A lovable, kissable ball of fluff. 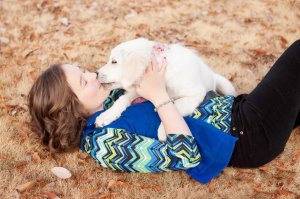 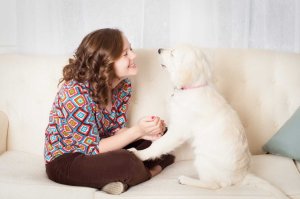 Megan is now 22. Dove will celebrate her 6th birthday in October.

The white dog with the golden heart has more than lived up to her name, bringing both peace and comfort to Megan, who suffered another health setback in 2017.

“I had emergency open heart surgery because both arteries to my lungs blocked. Neither of them had blood flow and that was something that was not fun and she also helped me get through that.”

In addition, Dove is a trained service dog. She is able to help Megan monitor the diabetes that’s a side effect of her pancreas removal.

“I don’t feel my blood sugars when they’re high or low.. so she can really save me from having such a low that I would have a seizure or such a high that I would pass out.”From a Make-A-Wish kid, Megan has grown into a young woman who advocates tirelessly – so others can experience the same power of a wish.

If you’d like to join Megan in her mission, click here and help the more than 80 critically ill children in North Alabama, 250 statewide.

HUNTSVILLE, Ala. - Paxton Medley was a pretty happy guy, when his family pulled into the parking lot. He thought they were going to the store.

That may not sound terribly exciting but with the pandemic, it had been a quite a while since Paxton had been in a store. When you're 6-years-old, even grocery shopping can start to sound more like an adventure that a chore.