Moving Past Animal Models with Better Data for Drug Discovery

TAIPEI, Nov. 24, 2022 /PRNewswire/ -- With the FDA Modernization Act's passage earlier this year, drug developers have the opportunity to forgo animal models in preclinical development for the first time in history. While the bill provides reprieve for the millions of animals tested in laboratories, it also provides a chance for human and sophisticated computer preclinical modeling to thrive in a world of ever-increasing data and technological complexity. 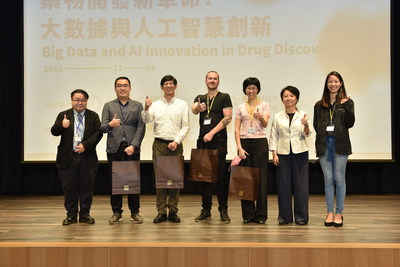 At the Big Data and AI Innovation in Drug Discovery symposium at the National Biotechnology Research Park in Taipei, Chief Scientific Officer at Ochre Bio, Dr. Quin Wills, spoke about his team's efforts to develop computer and human-based preclinical models to help lead the rapid pace of biotechnology innovation. The company was founded in Oxford, UK, in 2019, with a very strong focus on developing RNA therapeutics for chronic liver diseases.

Adding to the AI and Big Data discussion, the CEO of Insilico Medicine Taiwan, Dr. Jimmy Yen-Chu Lin, talked about how his company's AI platforms can help speed up therapeutic development. Dr. Jung-Chi Liao, CEO of Syncell, spoke about the company's new optoproteomics platform and its potential applications in drug discovery. Also, the RD manager at Acer, Dr. Inca Chen, highlighted AI and next-generation sequencing's role in the future of personalized immuno-oncology therapies.

The Industry's Need to Steer Away from Animal Models

For the past hundred years, the first "in vivo" step in drug development involved the use of mammalian models in predicting human safety and efficacy outcomes. While animal testing proved valuable in its own right for hundreds of therapies, as technology and our understanding of complex biological processes advance, it is clear that animal models will not suffice for next-generation therapies.

Now, Ochre Bio is leading the charge to develop revolutionary preclinical models to create more effective therapies faster than ever before. Wills said the company uses computer models to study liver disease and produce massive amounts of human data to decipher the complex links in biological processes that may lead to more effective therapeutic targets for humans.

One reason for studying human tissue directly instead of animal tissue is the discrepancy in the lifespan between the different model organisms. Wills highlighted this issue, saying that one in four people will deal with liver disease, and one in six will live to be one hundred years old. Short-lived animal models are not representative of human lifespans. Additionally, as humans live longer, our chances of developing multiple chronic diseases increase, adding to the biological complexity that animal models do not account for.

With these insights in mind, Ochre looks to leverage the data revolution to find solutions to long-unanswered questions in drug development.

In 2020, Ochre spatially sequenced approximately 1,000 human livers out of its Oxford-based lab, mapping the data to histology and clinical traits. The process is expensive and complex, but Wills said the methods are incredibly valuable. Using advanced computational methods, the team can link clinical histological features to spatial expression and map such data to 150 blood and clinical traits of each patient. Such computational models enable Ochre to identify dozens of new potential therapeutic targets for specific liver disease indications which they are now ready to test in different pre-clinical human models.

Human as the Model

Through monumental efforts like the Human Genome Project, the scientific community hoped that more data would lead to an explosion of new therapies. However, more data is only one of the factors in drug development.

While searching for why there never was an influx of new therapies, even with huge quantities of genomic data, Wills concluded that "not all data types are created equal." With this renewed mindset, Wills and Ochre set out to produce and find translatable human-based data coupled with better algorithms to take drug discovery and development to the next level.

One example of this endeavor is Ochre's Taiwan-based lab's efforts to single cell sequence and study precision cut liver slices at scale. The team can derive dozens of tissue slices from patient biopsies, manipulate the slices ex vivo, and study the effects of different manipulations from different patient samples. Single-cell sequencing of such samples from morbidly obese humans in Taiwan reveals intricate phenotypic associations in different cell types within the liver. The team is using such data to uncover new gene targets for chronic liver diseases.

Strikingly, Ochre Bio is taking "ex vivo" testing in a whole new level. With the advent of normothermic perfusion for sustaining transplant livers, Ochre has discovered new ways such perfusion systems may be used for studying and understanding the effects of drugs on whole human organ. Ochre's lab in New York is pioneering the use of such liver perfusion machines for testing their therapies on marginal donor livers and evaluating the physiological effects of therapy on whole human organ. By studying the effects of their therapies directly in the human liver, the companies hope to narrow the gap between animal testing and clinical trials in human and provide better outcomes for liver disease therapies.

With some remarkable accomplishments under its belt, Ochre is on track to significantly impact the biotech industry. With its computational and human-based approach, the company has big plans for its future.

Following up, Dr. Jimmy Yen-Chu shared Insilico Medicine's main focus, as well as what the company has accomplished these past few years.

Usually, traditional drug research and development would take more than ten years and around $1.8 billion. To shorten the process and cut costs, Insilico is looking to AI to revolutionize drug discovery and development.

AI is not a new technology, but its recent advancements have highlighted its potential in drug discovery. Dr. Chu also pointed out that in 2021, the top 20 AI companies have several assets approximately equivalent to the top 20 pharmaceutical companies, demonstrating how AI could help small companies push their pipelines into clinical phases quickly.

A Novel Platform to Redefine the Spatial Proteomic Discovery

Currently, it is hard to identify the proteome based on the morphology, and there are no tools for high-precision spatial proteomic discovery. Even though imaging is already working in spatially resolved protein identification, once the mutation comes up, it is unrealistic to color multiple antibodies repeatedly to study the distribution.

That is why Syncell came up with an alternative, novel solution. Inspired by the blue light a dentist shines in a patient's mouth, Dr. Liao wondered if it is possible to also shine a light on a specific location in the body to better study the proteome. Now MicroScoop enables hypothesis-free subcellular spatial proteomic discovery by integrating microscopy, deep learning, two-photon illumination, and mechatronics to facilitate high-content image-guided photo-labeling. Furthermore, It also allows spatially specific proteins from hundreds of thousands of individual cells to be labeled precisely enough for mass spectrometry sensitivity, redefining the spatial proteomic discovery as we know it today.

During the last talk, Dr. Inca Chen provided us with some insightful concepts on how next-generation sequencing (NGS) and AI can guide the design of immuno-oncology therapy, such as personalized cancer vaccines. She pointed out that with advances in NGS, cancer mutation profiling becomes practical in the clinical setting. On the other hand, deep analysis of cancer profiles can better dissect the status of tumors and inform treatment options. With AI and NGS aiding immuno-oncology biomarkers and treatment development, Dr. Chen believes that the best is yet to come.

With AI and Big Data's help, we can see unlimited possibilities and potential in this new type of drug discovery path. And thanks to Ochre Bio and other companies' efforts, biotech is several steps forward in revolutionizing the industry, providing new outlooks on the future of medicine.

For inquiries or corrections to Press Releases, please reach out to Cision.
✕
× Close Ad