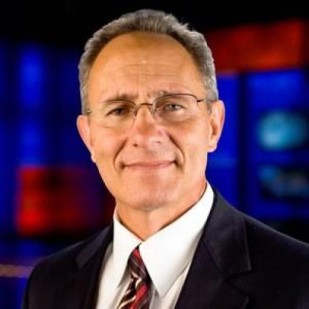 I’m from Greensboro, North Carolina. In fact, my mom, dad and brother are all natives of the Tarheel state.

We moved to Huntsville when I was in the third grade, because my father got a job with the Army Missile Command at Redstone Arsenal.

I grew up during the heyday of the work developing America’s first missiles, and the Saturn 5 program at Marshall Space Flight Center.

One of my best memories is the way the whole town shook when they tested the Saturn 5’s main engines in the mid-60’s.

I graduated from Huntsville High School and then went to Auburn, where I majored in Journalism, with minors in speech, English, and history. After graduation, I started work in Anniston at a small TV station that no longer exists, WHMA.

In May of 1977, my family moved back to the Rocket City, and I took a job as Sports Director at what was then called Action News 19.

In late 1999 I started making the transition from sports to news at WHNT News 19. I’ve been Senior Reporter, and Special Assignment Reporter, and now I’m the co-anchor of our week day morning news.

Among other things I also do our “Leadership Perspectives” interviews that are posted on WHNT.Com every Friday, and can also seen on our Sunday morning news.

I also do our “Defending America” reports that highlight the work in the north Alabama aerospace and defense community as well as what happens on Redstone Arsenal both in defense and at Marshall Space Flight Center.

My wife Sue is the Office Manager for Retina Services of North Alabama. I have two sons. Chris works at Huntsville Hospital. My other son, Wes, is married with two sons. His family lives in Spring Hill, Tennessee and he works at Caterpillar-Financial in Nashville.

You may see me from time to time, riding my bike on the the streets, and roads of north Alabama.

I collect first edition books, and my wife and I are modest collectors of art…especially by local artists.

I may be from North Carolina, and my wife from Atlanta, but we both consider Huntsville our home town.