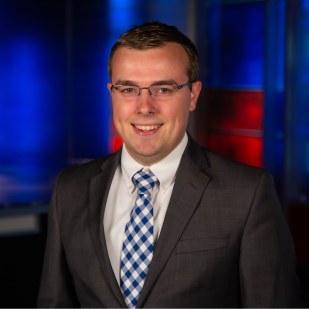 Ethan Fitzgerald joined WHNT News 19 in October 2019 as a multimedia journalist/reporter. Ethan is from Oregon City, Oregon which is located just outside of Portland.

Ethan started his broadcasting career in Missoula, Montana while he was in college at the University of Montana. Ethan used to ride his bike in -30 degree weather from his dorm room to KPAX-TV where he ran studio cameras and co-produced the morning show.

During his time up north, Ethan eventually ended up anchoring sports for NBC Montana. He covered the Montana Grizzlies, one of the top FCS football programs in the country.

Ethan most recently worked in Dayton, Ohio for WDTN-TV as a reporter and sports anchor. Over a three-year period, Ethan covered the opioid epidemic extensively. Between 2018-2019, Ethan covered a massive tornado outbreak in an urban area, several major union strikes and a tragic mass shooting in Dayton.

Ethan, his wife Stefanie and their 2 cats Griz and Bailey are new to the South. They are always looking for a new adventure.